Five Nights at Freddy's: Security Breach is undoubtedly the biggest game in the FNaF series to date (if the initial 80 GB filesize on PC didn't demonstrate it enough). Spanning across the Mega Pizzaplex, a seven-story building, this game breaks the traditional 'Sit N' Survive' formula of the previous games and instead goes for a free-roam mission-based structure, a first for the series.

Despite being delayed two times before release, there is still tons of material left over in the files. The sheer amount of unused functional content and various comments from the developers suggest that a lot of stuff was dummied out in order to finish the game on time. 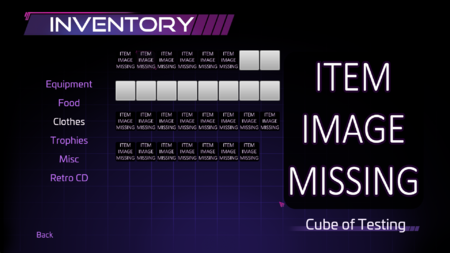 The following collectibles are all unused, using a placeholder graphic for their icons. As they are only collectibles, they have no other bearing on gameplay.

Despite never chasing the player in-game, Burntrap has fully configured AI parameters like the rest of the animatronics. This may mean that at one point in the game's development, you may have actually been chased down by Burntrap, but in the final game this never happens.

There is a folder in the game's content directory called TEST_ProceduralWalls that contains many textures, meshes, and a 9211-line-long blueprint file called BP_SplineWall.uasset. It is unknown what this would have been used for.

This section will only detail text that wouldn't have been shown via subtitles. For unused subtitles, see the Unused Dialogue sub-page.

Used in the Survival Mode menu.

This line of text makes it seem like at one point in development, Gregory bringing up the watch would not pause the game, allowing the Animatronics to still jumpscare him when it is up.

A basic text string that teaches the player about what they can use the Fazwatch for.

An earlier version of Chica's guitar is present within the files, consisting of different textures and a slightly different model. Interestingly, this model is used by the Chica hologram in the final game, though the regular version is never used. 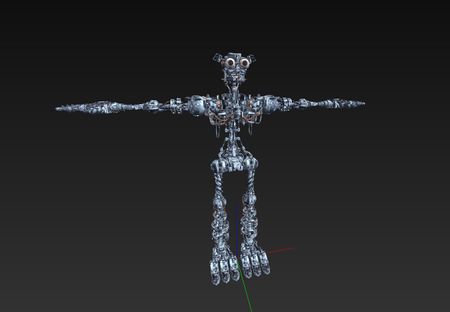 An unused endoskeleton enemy that, aside from a model, only has scrapped mission text mentioning it. In the final game, its head and some parts of its body can be found in the first office in the game, but the rest of the model goes unused. The related unused dialogue suggests that this would've appeared in a scrapped boiler room area. 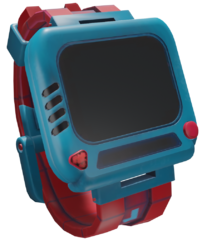 An unused version of the Fazwatch exists in the files which doesn't look like the Freddy version we know. In the files, it is called "basic Fazwatch". The model can be seen in the unused character gallery on Gregory, and it was also seen in the October trailer for Security Breach.

The elevator found in the main area has buttons that are unable to be pressed due to the doors never opening. If the player were to enter the elevator via hacks, however, the buttons can be pressed, making the elevator doors close and loading the player into a separate area of the map. This elevator was once seen in a pre-release trailer, but it is never used in-game through legitimate means.

An unused distraction that resembles a glass ball. When summoned in-game, it quickly falls to the ground and shatters, signaling nearby animatronics.

In the raw asset files for the maps of the game, several strings of normally-unseen debug text can be found, some of which may refer to unused content. It should also be noted that these are all seen in "old" versions of areas that appear to have had an updated map made (i.e. MAP_Laundry_Room_LightsOn vs. MAP_Laundry_Room_NEW_LightsOn). 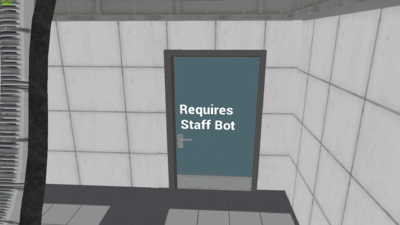 In MAP_Laundry_Room_LightsOn, the text 'Requires Staff Bot' can be seen in front of a door. The closest thing to using a Staff Bot in the game is when the player temporarily controls the chef Staff Bot in order to lure out Chica, but that happens nowhere near where some of these doors are located. It is also possible that this was just a note left in by a developer leaving a reminder that a Staff Bot still needs to be added here, as in the final version of this area a Staff Bot is seen behind this door. 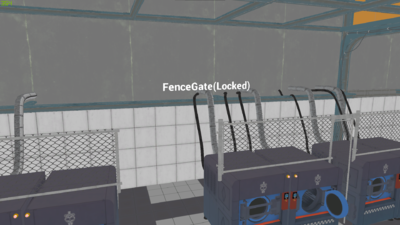 Also found in MAP_Laundry_Room_LightsOn, above a fence in one of the rooms, is some text that says 'FenceGate(Locked)', despite no such gate existing in this room. This suggests that a fence gate (probably requiring Monty's Claws or Chica's Voicebox) was once planned to be inserted here. 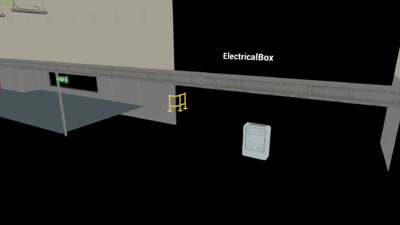 Of course, there is also some development text located in the internal files of the game. A few of these were added in the 1.05 patch of the game, and include some interesting stuff, such as references to cut locations, as well as some colorful language in a few areas...

The game's .exe file is referred to as 'fnaf9.exe'. Additionally, several internal files refer to the game as 'Quarters'.