Flash Point is an unlicensed Tetris variant released only in Japan. Unlike Tetris, which is usually a pure survival, your goal is to eliminate all golden blocks from the field. Strangely, this game names its only game play as "Ojama Mode", but there's a reason for it...

Add the following cheat in your MAME to enable mode select screen (works with both fpoint and fpoint1):

Alternatively, you can skip to Normal Mode without using the mode select screen:

Unlike "Ojama Mode", you start with an empty field. Like Sega's Tetris, the goal is to survive as long as possible. 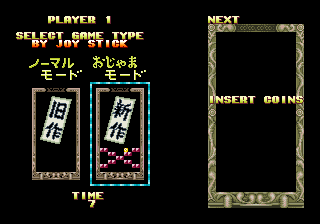 Normal Mode uses a different high-score list than Ojama Mode, and can partially be restored by the following cheat:

The default high scores for Normal Mode are as follows:

The word "Stuff" was most likely meant to say "Staff", and was mistranslated from the fact that both words have the same exact spelling in katakana, "Sutaffu" (スタッフ).

Sound #90, the default music in the sound test, is not used during normal gameplay. It is used in the disabled Mode Select screen, though, as well as the title screen of the cancelled Genesis port.