Flying Warriors is a localized remake of Hiryuu no Ken II that employs the graphical and mechanical improvements from Hiryuu no Ken III. It redesigned the transformed states of the main heroes in order to give them Americanized superhero-like designs (or at least what passed for American superheroes in the minds of the Japanese developers), going as far as to even replace the original title theme with a new one that totally doesn't sound like John Williams' Superman theme in any form. 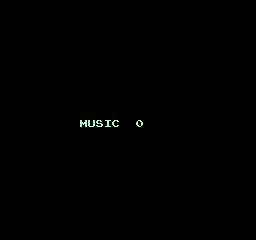 Enter the password MUSIC. Press Up / Down to select a track, and A to play it. Press B to return to the password screen.

Enter the password END to view the ending sequence. 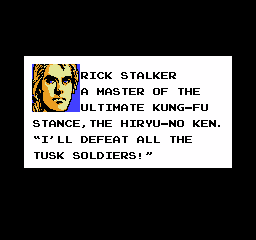 Enter the password 888 to view the character bios. Press Select to return to the game. 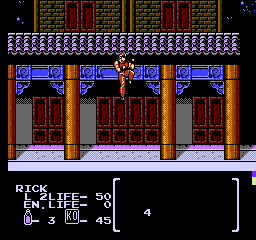 Game Genie code GESLAPEI will re-enable an in-game stage select routine. During the game, hold A and press Start. A number will appear instead of the game's menu. Select a location number, then press Select.