Freedom Fighter is an incredibly rare LaserDisc-based rail shooter that uses mostly original anime footage based on designs from the films Galaxy Express 999 and Adieu Galaxy Express 999. What makes the game more special than many other LaserDisc games is that it combines the technologies of Firefox's instant video switching via a Philips 22VP931 LaserDisc player and Star Rider's widescreen video panning. It would later be brought over to the Philips CD-i in a massively-downgraded form.

The game is currently unemulated, though ROM dumps are available to peruse.

At least three versions of the game are known to exist. The earliest is a version going by another title, 999 Interactive Movie (which may be why the beginning of the intro shows the train zooming in), and the later two going by the more common Freedom Fighter title. The first and second use a modified Williams Star Rider board set utilizing an M6809 CPU, while the third uses a completely different dedicated board set utilizing an M68000 CPU. The Star Rider hardware and dedicated versions have various differences between each other.

It should also be mentioned that Hideki Takayama's name is misspelled as "Hidek Takayama" in the dedicated version, while it is spelled correctly in the original Star Rider version.

This screen for when you lose a life originally had the character's hair be very dark. This was changed to be much lighter in the dedicated version.

Both versions have an on-screen service menu, however the Star Rider version lacks any hardware tests. The Star Rider version automatically goes to this menu on every boot-up before going to the attract mode. The dedicated version adds a variety of tests for things such as the logic EPROMs, video expander, etc.

The Star Rider hardware version also completely lacks a continue feature (though it does have infinite lives), while the dedicated version adds this and shows a Guardian Gazette screen variant with the text "EXTRA!! EXTRA!! To Continue Insert Coin - 10 Seconds Left to Live!" It can be set to stop giving them out upon reaching the train.

This button that slows the game down for a limited time was originally on the top of the joystick in both Star Rider-based versions, while in the dedicated version it was moved to the control panel.

The attract mode video is present twice on the Laserdisc, first in a linear form (which may be unused in-game but can't be confirmed without emulation) and second being chopped up into many short segments like the majority of the footage on the disc so that it could be presented as a perfect loop. In between the two versions is a very short segment of the opening theme (different to what's heard in the rest of the game) that has no video accompanying it that isn't played at all in the loop.

Certain scenes in the game have two versions on the disc, one showing you not hitting the targets and another showing them being hit. This was done so that when you aim at one and successfully hit it, the game can immediately jump to the version of the footage where it has been hit in the same position. There are times where it is impossible to see certain parts of the "hit" footage in-game because of there being no opportunity to hit anything.

Multiple frames are present at the beginning of the disc detailing some info on the production. 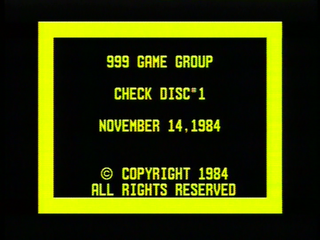 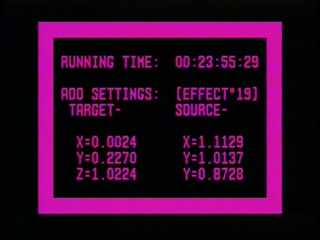 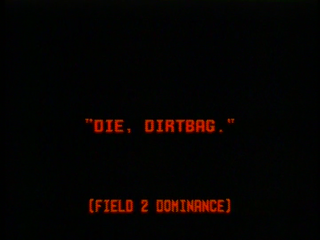 In the Star Rider hardware version, if the game detects a fault with the PIF board, it will pop up this error message: