Freedom Planet is a 2D platformer about a trio of female anthropomorphic animals on a mission to save their planet from an evil warlord.

Originally planned as a Sonic the Hedgehog fan game, game developer Strife quickly changed her mind and turned the game into her own original property. The game's fundraiser and launch were successful, the reception positive - Freedom Planet was praised for its unique mix of Sonic and other retro game elements.

Since v1.20.2, attempting to play as either Spade or Torque will result in the game restarting, thus also locking access to Horizon Starport and Warp Sector due to the fact that the game forces Torque as a playble character on them. 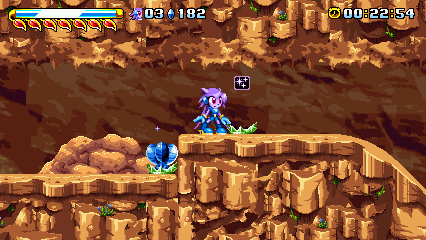 They are still sometimes used as a timer to delay their effects. Variable A starts with 0 and increases by 1 each frame.

Crystal Flowers, Shard Flowers, Keystone Monitors, Bombs, and Crates spawn their contents instantaneously and as such, the icon will not even be created. Other types of monitors are set to be triggered once A reaches exactly 64 (which is a whole one second and four frames).


Despite the sign only showing up on very early pre-release footage, it is still used in the game.

Object name: Object_CatFace
Found in Lilac's Treehouse (Day) and used during a cutscene but invisible, it will store Lilac's X position (a value of 252) right before she runs off in the blooper moment. Once the next line of dialogue is loaded, Lilac will be teleported back to where she originally stood using the stored value.

Object names: Boss_AnimationData, Boss_JumpPoint
Icons for the Mantalith boss in Relic Maze that are used to trigger its jumping behavior.

Landing on the pieces of the keyboard in a specific order rewards the player with a 1-up.

What most people won't notice is that the note sheet is of the victory jingle found in Jade Phoenix, one of Strife's old game projects. 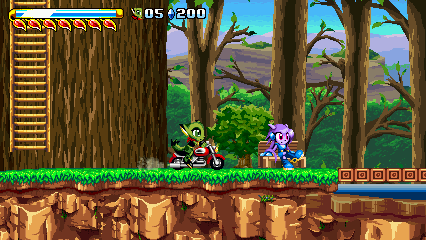 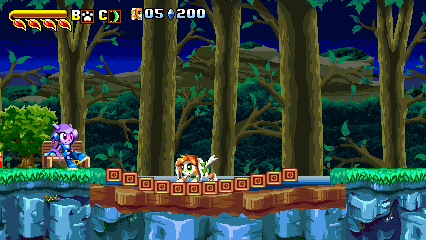 While technically used, both areas are only seen in cutscenes and cannot be explored in any of the game's release versions. Through memory editing, it's possible to access the frames and, as long as global variable Checkpoint doesn't have a value of 11 or higher, no cutscenes will be triggered. You can enter the treehouse and get to the living room, but there is no way to enter the bedroom. If you are not playing as Lilac, she will sit outside on a bench next to the bridge.

In the night version of the area, Torque (in his Shellduck disguise) can be found along with his tent to the left of the treehouse, though the tent cannot be entered. Also, it is possible to talk with Lilac by approaching her and pressing Up, though all this does is temporarily glitch the character you are using (unless you are too far away from Lilac, potentially making you stuck in that case), and none of the assigned voice clips actually play.

Pausing the game in both areas brings up the pause screen used during cutscenes. Leaving the area triggers the stage transition, moving the player to the next stage, Aqua Tunnel. 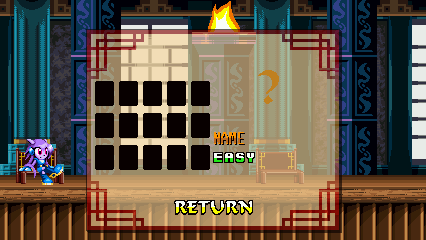 Frame 76.
Albeit being similar to the Shang Mu Academy, the Shang Tu Dojo has a different setup, and no stages can be played, unfortunately. The background torches ended up reused for Trap Hideout. 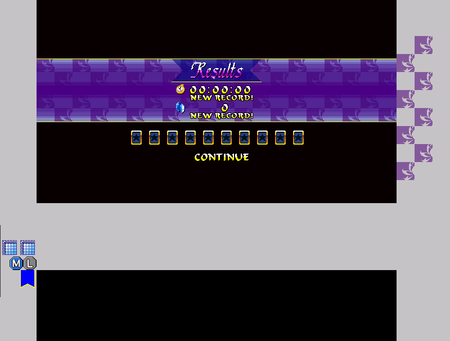 Found in Frame 8 ("Update Records").
All graphics for the Result Screen found in early prototypes are still present, though they are missing all of their functionality. For reference, the top border of the screen starts at X:0 Y:-496, placing the bottom border at -120 pixels above the room's boundary.

Found in Frame 14 ("Bonus Stage").
Starting at X:464 Y:392, there's a different layout for the bonus stage. The targets, which find their use in the Shang Mu Academy, are non-functional. It is also not possible to jump through the platforms since they are tiles with basic non-layered collision.

Found in Frame 24 ("Dragon Valley 4").
At around X:12000 Y:224, there's a pair of "floating" islands that are not necessarily inaccessible but hard to reach thanks to the camera trying to focus on both the player and the boulder during the chase section. 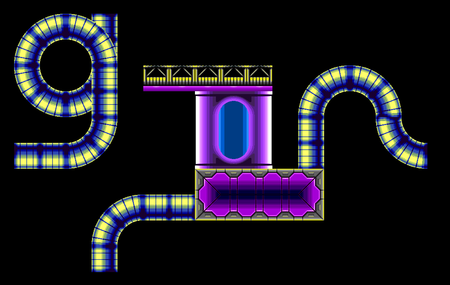 Found in Frame 48 ("Thermal Base 4").
Starting at X:4160 Y:824, it may at first seem like an unused tile formation. In actuality, a resized version of this formation can be seen in the stage's background as part of the parallax, albeit with more bland coloring. 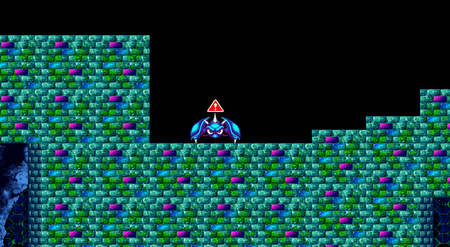 Found in Frame 70 ("Final Dreadnought 5").
Below X:0 Y:730, starts a big section only visible during an exposition from Torque. 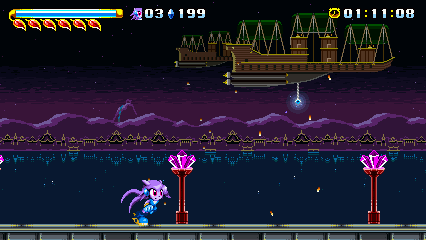 There still exists an older version of Fortune Night's scenery shift that happens when the player leaves / enters the mall. Normally invisible, the Sky Battalion can now be seen raining down projectiles. One of the ships is also shown slowly pulling up the Kingdom Stone. Reactivating this in place of the new scenery shift will result in a softlock, as the Robopanther cutscene will never be triggered. 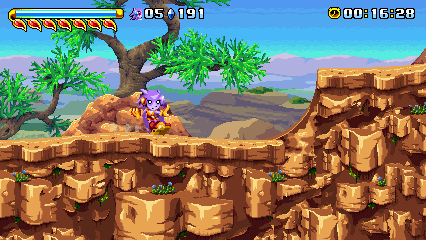 Originally, the game allowed you to change the colors of the character's outfit, or hair when playing as Milla. Lilac, Carol, and Milla all have finished palettes, which cannot be said about Torque and Spade.
This went ultimately unused as it caused graphical glitches in all "turbocharged" builds of the game. Not all stages suffer from them but special mention goes to the Robopanther boss, which can softlock the game due to the glitches occasionally modifying some objects' functions.

It is actually possible to turn off the voice acting and instead have the dialogue be voiced through blips.

After its short intro scene, an unused trigger would cause the camera to slightly lag behind the player during the fight. 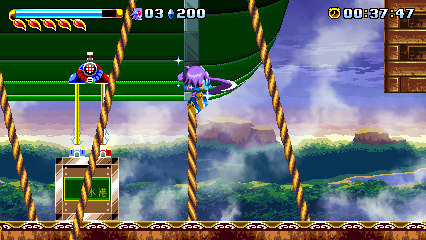 Object name: Enemy_Magnetizer
An enemy called "Magnetizer" can be found in the "Earth Ship" section of Sky Battalion, albeit placed out of bounds and thus immediately removed from memory. Design-wise, it looks pretty similar to the Pelletizer, just with magnets instead of cannons.

It has 15 HP. Once the player is standing under it, it will attack by launching its magnets, which can deal touch damage.

There also exists a special kind of crate called Enemy_MagnetizerCrate that just looks exactly like a pushable crate found in the Metal Ship. If the Magnetizer is standing under one, it will use its magnets to pick up the crate, making it possible for the crate to be moved around. After some time, or if the player happens to stand under it, the Magnetizer will then drop the crate. The crate does not crush the player but still deal damage.

Lilac breathing an air bubble. Goes unused since the bubbles were modified from their Sonic-typical behavior.

An older version of Lilac's dance.

Spade's sitting animation, which only consists of a single frame.

Spade laughing. Split into the entry frame and the loop.

Unfinished sprite of Serpentine falling over, which is missing his arms.

Sketches of an unused shark enemy, found inside the Buoy Buoy animation set.

Sketch-ish sprite for a pose the Shade Trooper enemy could have made.

An alternate sprite of the Pushup enemy. Its upper cannon looks different and it is missing its bottom cannon.

Unused animation of the Ninja enemy throwing something. Since the Bike Ninja never leaves its bike (except for when it dies), it goes unused.

Sketches of the Bike Ninja.

Sketches of the Rocket Puncher enemy.

Unused frame for the enemy variant of Sparky, showing it has teeth. 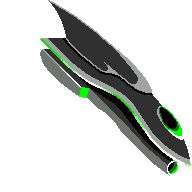 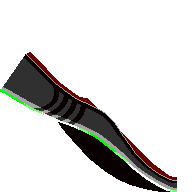 Old and unfinished sprites for the Absolution's head, both of which are gray instead of the turquoise that the final sprite uses.

Sketch of something called a "Crane", which is literally a crane. The object that contains the sprites uses the "Enemy_" prefix, hinting that it was intended to become one at some point.

An older version of the mural found on the wall of the living room inside Lilac's Treehouse.

The poster of the Ninja Hurk translated into Chinese (莫霍克突变, "Mohawk Mutation").

The sprite of an unused enemy called "Mallet", which is basically a recolored Turretus, but with a giant hammer attached to it. It was never programmed into the game and remains out of bounds. Strife herself referred to this enemy as a "Hammer Turretus".

Sprite dump of the "Hopper Missile", at different angles and with various design tweaks. Like the Mallet above, they were merely "sketch" sprites for potential enemy concepts.

The sprite of a basketball, and a bouncing animation.

A basketball hoop along with the net that is attached to it.

End-of-goal post images for Lilac (in her old design) and Carol.

A grayed-out version of the "ADVENTURE" text on the title screen. It was used in earlier builds of the game where Adventure Mode was inaccessible, but goes unused in the final game.

The "COPY" text that was used for a, guess it, copy save function.

An older version of Neera's Ice Ring projectile. Looks thinner than the one seen in the final game.

The "PRESS START" text, seen in the title screen, with a "+" button added on top of "START". Since it's only meant to be used in the Wii U version of the game, it goes unused in the PC version.

A single leftover save slot stores older versions of various save file portraits. Lilac's and Carol's set of portraits already consists of the four used in the final but less polished while Milla only had one at some point.

Spade's save file images don't use original sprites and only duplicate frames of his character select frames.

Save file images for Torque.

Location: *game_folder*\Data\BGM\m_stage2a.ogg
An alternate version of "Relic Maze 1" created by BlueWarrior. On Soundcloud, Strife stated that she chose Woofle's rendition as it was "the best fit for the pacing of the stage". Another, unfinished, version of the track has been released in the Official Soundtrack under "Relic Maze (Extended Mix)".

Location: *game_folder*\Data\BGM\m_disaster.ogg
Can be found in the Official Soundtrack, where it has been dubbed "Disaster Strikes".

Location: *game_folder*\Data\BGM\m_stage7b.ogg
Trap Hideout was originally intended to have a second variation. It was ultimately left unused, as the game does not feature a second "act". This track has been included in the Official Soundtrack.