Frogger, he's back! Also pretty much the last classic-style Frogger game until Frogger Returns and Frogger: Hyper Arcade Edition (and either the best or worst depending on who you ask). It is also absolutely brutal in difficulty, especially when compared to its immediate sequel.

This track has no identified name, but the game's source code suggests it was for the cut Ruins Zone.

There are quite a few differences between the different versions.

The PC version contains a .PAL (Color Palette) file for each level, along with a palette named "OPTIONS.PAL". These files are believed to be unused because if they are corrupted, there are no visible changes.

Tropical Trouble and Frogger Goes Skiing have some unused demos. They can be seen in the video.

This file was found in the PSX build. It was created by developer Tim Closs, it was used to test many different things.

One of the main things it was used to test was movement and slopes.

It contains a mud-pit which causes the player to bounce. This behavior is not seen in the retail game.

The map is very unpolished, with lots of holes in the collision grid and outdated textures.

This odd unused map is likely designed and named after QBert.

The map has no textures, only vertex coloring.

Words cannot describe how strange this map is.

Out of Bounds Models 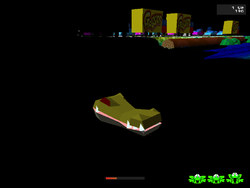 This model matches the crocodile head model used as an enemy in this zone. However, this is part of the level geometry. 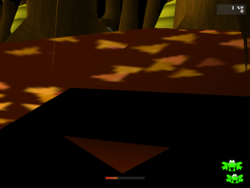 The entity that blocks the line of sight of bee swarms, FOR_STAT_TREESTUMP, uses this single-polygon model, which goes otherwise unseen due to these entities being placed underneath the level geometry. 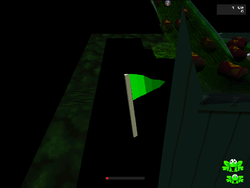 This flag looks identical to the flags used in the multiplayer stages as checkpoints. However, it is part of the level geometry, and not animated. 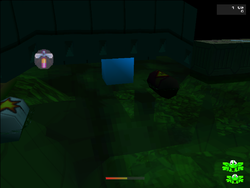 This box model was accidentally put into the map instead of the entity it represents. The entity that was supposed to be placed here would kill Frogger when he touched it, and not display in-game. However, the 3D model was placed there instead.

Originally, several cheats were published on the Frogger website. Additionally, there is an extra cheat which was not published.

When the timer reaches 0, it will remain at zero, but the player will continue playing as normal instead of dying.

It is unknown why this cheat-code was not published.

FROGPSX.MWD contains all game files, along with its build date.

The file SLUS_005.06 on the PlayStation (US) version of the game contains debug text.