GachaSta! Dino Device is a gashapon simulator inside of a PDA simulator. 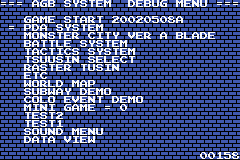 Changing 0x4DCA to 0x32 will cause the game to boot into debug. The menu displays an apparent build date of May 8, 2002. Interestingly, it also shows that the internal names of the game/versions as MONSTER CITY VER A BLADE and MONSTER CITY VER B BLASTER (Red version has more melee weapons and Blue version has more projectile weapons, so this makes sense.) At the bottom of the screen is what appears to be a total frame counter.

Testing certain features is difficult because debug mode appears to ignore the current save, using blank or default values for variables such as the player's name, party, etc, which causes glitches when you try to walk around or battle. A few of the menu options also seem to be partially or fully disabled, some can only be reached by booting straight into them.

These are found in the DATA VIEW menu and were obviously used for testing graphics/animations. They are placed before all of the other graphics in the viewer and used in a few test scenarios.

Shown in a cluster of 16 (arranged 3-5-5-3), also shown as two rapidly spinning sprites stacked on each other.

10 placed in a haphazard pattern, all of them at a 45 degree angle, with one of them animated as blinking.

Only the blue square part of this one is ever visible. Shown both as a still square, and as two slowly tilting squares stacked on each other. 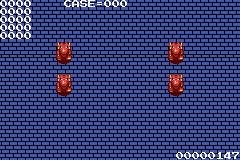 This isn't available from the main debug menu, and must be booted into by changing 0x4DCA to 0x30. It may have initially been accessed by one of the unselectable TEST options on the menu. It displays four Carina walking sprites, the first of which can be moved around with the D-Pad. Pressing Start will pause animation/movement, and holding R will slow the framerate down. Pressing A/B changes the variable in CASE, and some of the numbers to the left, but doesn't seem to do anything else. 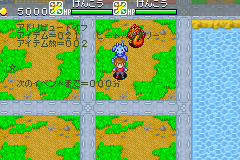 A secondary debug menu, titled でばっぐモード改, can be activated by changing RAM address 020111FC to 14 while in the main game. Its text isn't visible unless you force a redraw (eg by pressing Left/Right to make a selection.) The first option is アトリビュートオフ / アトリビュートオン (Attribute Off / Attribute On), you can toggle this with Left and Right but it doesn't seem to have a visible effect.

The second option is アイテム (Item) which allows you to cycle through any of the 500+ items in the game, pressing A to add one to your inventory. Sometimes the items also get a random boost of +01 or +02 to their stats - this is normally only used for Weapon and Armor Devices, but food, materials, medicine, and building kits will also get these random boosts (though they are completely ineffective on anything that isn't a Device.) アイテム数 (Number of Items) displays the current number of items in your inventory, up to a maximum of 16.

Most of the other options after this aren't visible or don't appear to do anything, though the sixth option (shown selected by the star cursor at right) will open the Dino Center storage menu if you press A. The final visible option is 次のイベントまで＝000分 (Next event=000minutes) which doesn't appear to be changeable.

Several plaintext strings are located in various areas of the ROM, it's unknown how they would have been used (possibly as labels?).