GachaSta! Dino Device 2 is a gashapon simulator inside of a Medarot simulator. 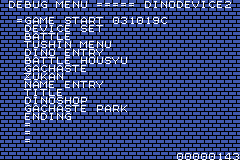 Changing 0x5B2C to 0x30 will cause the game to boot into debug. The menu displays an apparent build date of October 19, 2003. At the bottom of the screen is what appears to be a total frame counter. Pressing Select will switch to page two of the menu, titled "SYSTEM TEST", which houses the sound and gfx tests.

There's not really anything fun to do in here, the majority of the options just let you view various scenarios that you'd see in-game.