Note: all MAME cheats (not sure about button codes), sound codes, and ROM locations apply to the gforce2 set in MAME

There are two hidden messages in the game, both saying similar things. 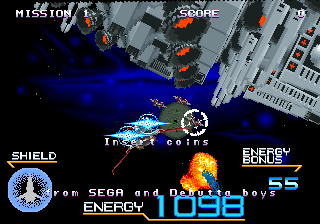 The first is easy to trigger: simply hold Shot + Missile + Start during the demo roll without the on-screen control guide (that is, the odd-numbered demos). The message from SEGA and Debutta boys will appear over the Energy meter.

The Japanese versions do not allow you to continue when you die. The international version does, however only on the first five missions (if you die on the last, it's game over regardless of how many credits you have inserted). As a result, some ports (like the Genesis one) do not allow continues while others (like the Commodore 64 port) do.