This graphic is found with the rest of the Interrupt Save graphics, as it was in Game & Watch Gallery. They still wanted to do a Very Hard difficulty for the Classic Mode, but alas, it was never finished.

Each of the five starting games will load a partially programmed Classic Very Hard mode. Only the save interrupt was implemented. It is still possible to display the graphic for each game by using the below GameShark codes, though all games will behave exactly like Game B.

An early title screen (likely a placeholder) is still in the game in all Game Boy forms, and can be accessed with Game Genie code 0C1-F7F-916 or the debug menu (see below). Pressing Start takes you to the normal title screen.

Game, Demo, and Music have their own menus.

Select what game to play. That's already apparent. Press A to play that game.

What difficulty you want. Classic modes have Game A and Game B, while Modern modes have Kinoko (Mushroom), Flower (Hard), and Star (Very Hard).

This should set your score, but this doesn't seem to work.

Should set your miss count, but this doesn't seem to work either.

Select which Demo you want to see.

Select what screen you want to play.

Displays contents of the appropriate VRAM bank. No controls here, other than pressing B to exit.

This should probably set the Music variable on/off, but it never seems to save a value either way.

Changes the tempo of the current track. Ranges from 0-F, with 0 being the fastest and F being the slowest.

Normally inaccessible from the main debug menu, due to a bad pointer. However, by using Game Genie code 051-F7F-916, you can start at the Save Interrupt screen. Your current game and information is shown. You can erase the save interrupt by setting DATA CLEAR in the Save menu.

A slightly corrupted screen showing statistic and information about the ROM. The palette was never programmed for the GBC mode; only SGB mode has a proper palette. 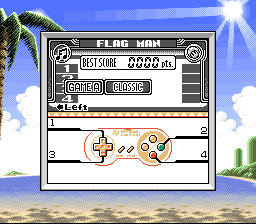 When Game & Watch Gallery 3 was localized to the US, the SNES controller's A/B-button palettes were not changed to reflect the US blue and purple buttons. Rather than update the palette completely, they forgot to update the attraction attributes, leaving the original code assigned to the palettes visible.

This can be seen by exploiting a palette glitch which involves clicking on the camera icon then waiting for the palettes to change. The easiest way to do this is to pause and exit Classic Flag Man, although it can be done using any game's Classic mode.

There are two unused Star icons and unfinished path. 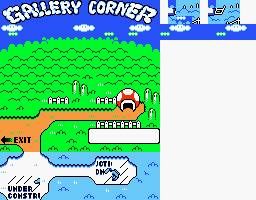 There is an unfinished path that shows two inaccessible buildings and a few unused graphics. It is unknown what buildings or features may have been planned.

The early title screen has several unused graphics, and some very strange ones at that.

The 150 congratulations screen does not exist in the original Japanese version.

Because the game is locked in Game Boy Color mode, it cannot be played in monochrome Game Boy mode or with Super Game Boy borders.