Along with the first PlayStation game, this is the only Ganbare Goemon using the bird eye view perspective similar to The Legend of Zelda: A Link to the Past. Nonetheless, it's one of the best games in the series along with its sequel, introducing Yae as a playable character for the first time since her Famicom debut. The dungeon levels still are all about the tried-and-true Goemon 2D platforming goodness. Existence of prototypes with debugging features is known, although such features seems to be removed from the final version.

Several bits of debug text are located in the ROM. Pointers to some of the text still exists, though most of the code which enables the relevant debug features seems to have been deleted. The text uses the same formatting as the error message displayed when attempting to play the game on a PAL console.

(All offsets refer to an unheadered ROM.)

These names are those of the bosses appearing during the Mode-7 Impact battles, and yes, they do include a dam (it makes more sense in context... somewhat). The last two entries ("Before Legend" and "After Legend") are referring to the two segments of the final boss battle, where a certain "legendary" mecha is summoned.

(These two lines are formatted so that the word "gametype" overwrites the word "boss" on-screen.) 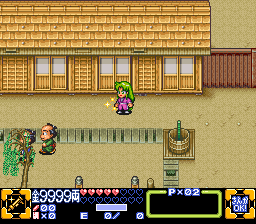 By editing the SRAM, it is possible to add the requirements necessary to power up Sasuke and Yae's subweapons. However, neither of them actually have a powered subweapon; both characters just fire their regular subweapon when charged up. There is proof that one was planned for Yae, however, as charging up will display an otherwise-unused golden Bazooka icon, which was later used in this game's sequel and final SNES entry, Ganbare Goemon 4.

There are 3 known versions of this game.

Rev 1 fixes the Wave Kunai bug. If the bug triggers, you will be unable to get this upgrade, forcing you to restart from the beginning.

Rev 2 fixes another game-breaking bug. In Mechanical World, you must buy fried tofu in order to get grabbed by the bird and dropped into the next area. However if you die before pressing the switch that destroys the barrels that block this area, after you re-spawn, the bird will not reappear. If you save in this state, you will be stuck for good.