Gearheads is a strategy game in which players perform battles of wind-up toys.

These provide many debug and customisation functions. One of the game's designers, Eric Zimmerman, mentions in his book Rules of Play: Game Design Fundamentals that an early prototype featured screens that enabled players to tweak the toys' attributes.[1] It is possible that these are leftovers.

These menus and screens are only available in English, even in the French, German, Spanish, Italian, and Dutch versions of the game.

This menu can be accessed by using a hex editor to change gear_en.exe's value at offset 000286A2 so that it reads "FullMenu" (without the quotes) rather than "SignMenu". Alternatively, resources can be edited (e.g. menu items can be copied to SIGNMENU, or the menus can be swapped) with a resource editor. The game screenshots in the manual appear to use this menu. Despite its name, FullMenu is missing the options menu (containing items to enable/disable the sound and music, and the joystick setup screens), an item to access the high scores (although this is accessible from its level select), and an item for the normal credits.

Setting the toybox of the right player.

The game sometimes asks the player to save settings. 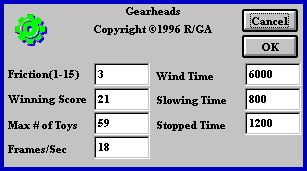 Winning Score, Max # of Toys, and Frames/Sec are self-explanatory.

There are some additional settings hidden below the dialogue, accessible by editing it with a resource editor and extending the dialogueː 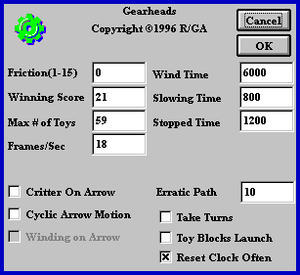 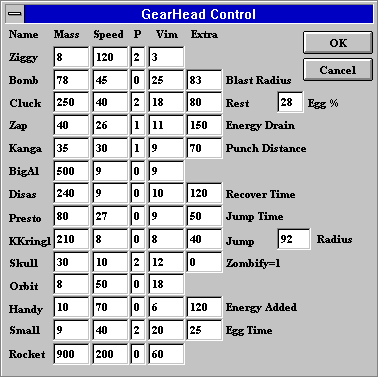 Enables players to change the stats of the toys. P is the movement pattern: 0 is straight, 1 is diagonal, and 2 is erratic. Vim sets the rate the toy uses energy (the higher, the faster). Most of the rest is obvious. Changing these values starts a new game. 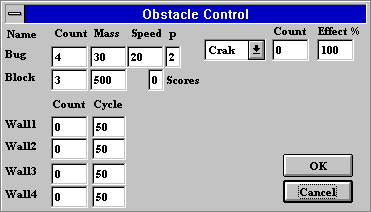 This enables the alteration of the level's obstacles. Most of the settings are self-explanatory. Changes are saved immediately.

Enables the modification of each object's (not just toys) collision box. The "=" button advances the game to the next frame. The selected object and its collision box are shown in the toyboxes. 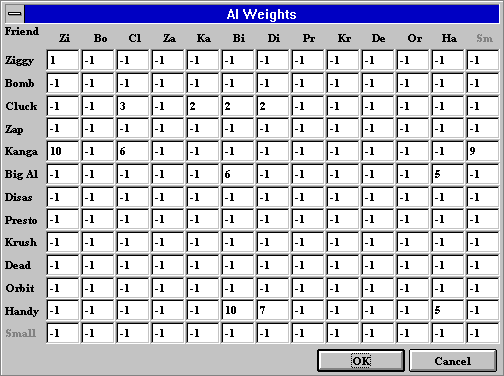 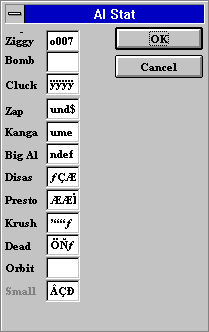 Changes are saved to a text file in the game's directory. 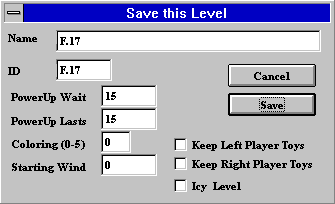 Clicking Save saves the current level and its settings to Gearhead.ini. Most of the options are self-explanatory. If this dialogue box is copied to the demo version, saved levels appear in the Level menu. The Coloring and Icy Level settings still work. 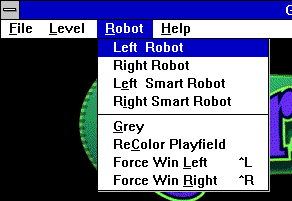 It is also possible for the player to play on the left side against the AI on the right. 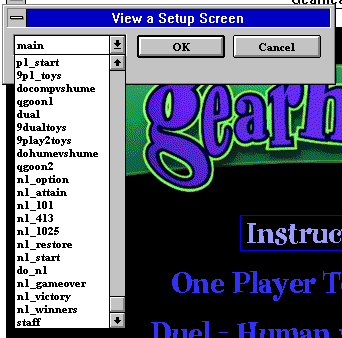 Players can jump to various screens from this list. 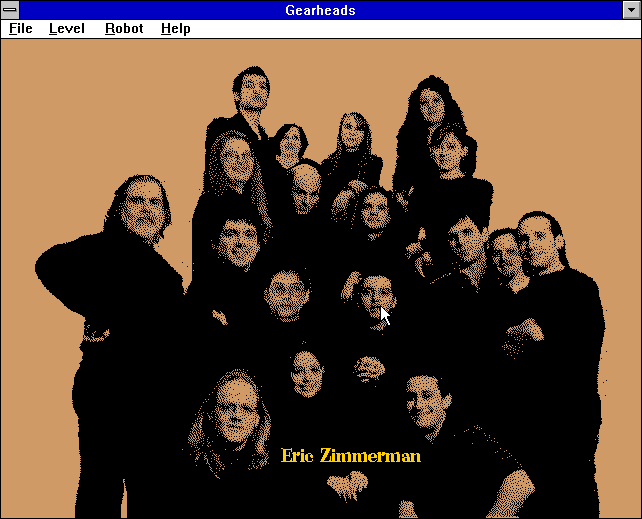 Accessible from the "View a Setup Screen" dialogue, moving the cursor over each person displays their names. The image can be found in gearage.dll. 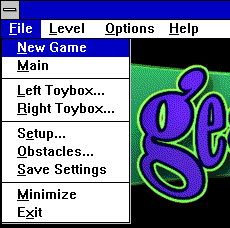 Provides menu items for toybox control, App Setup, Obstacle Control, level saving, and screen selection, as well as the standard Options menu sans the joystick setup functions. Accessed by changing the string at offset 000286A2 to "AppMenu" (without the quotes) with a null at the end.

A very minimalistic menu, and appears to be the one used by the demo version. Accessed by changing the string at offset 000286A2 to "DemoMenu" (without the quotes). 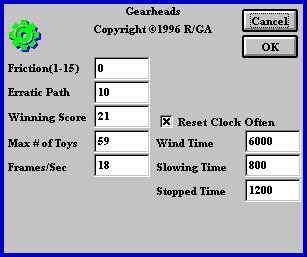 Named as "1" in the executable file, cannot be run from the Full Menu and appears to be a different version of the App Setup dialogue: it contains settings for Friction, Erratic Path, Winning Score, Max # of Toys, Framerate, Reset Clock Often, and Wind, Slowing, and Stopped Time.

These cannot be run from the Full Menu, and appear to be other versions (one for each player) of the Toybox Contents dialogue, the main difference being the presence of a string telling the other player not to look.

Named "2" in the executable file, this is very similar to the used version, the differences being the length of the drop-down menus and the use of "Btn" instead of "Button". The unused version is only available in English.

Named "3" in the executable file, this is almost identical to its used counterpart, the only noticeable difference being the word "Buttons" being singular. There is no non-English version of the unused dialogue box.

There appears to be a couple of unused parameters for gearhead.ini: Curved, and SuddenDeath. These strings appear alongside parameters (such as Winningscore, CritterOnArrow, and WrapArrow (Cyclic Arrow Motion)) saved to and read from by the App Setup dialogue box. gear_en.exe also contains the string 'Sudden Death' at offset 36FED. Curved appears to have a default value of 12, and SuddenDeath appears to gave a value of 300, judging by the values starting at 2A65E (Erratic.10.Curved.12.Taketurns.0.Maxtoys.59.GaugeTime.6000.DecayTime.1200.SlowingTime.800.Resetimeonpick.1.Winningscore.21.Level.1.BlockLaunch.0.FrameStep.55.MaxFrameStep.550.CritterOnArrow.0.WindingOnArrow.0.WrapArrow.0.SuddenDeath.300), which correspond to the default values seen on the App Setup screen.