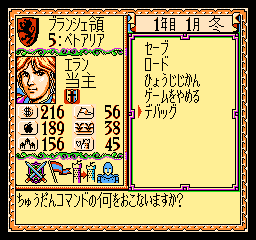 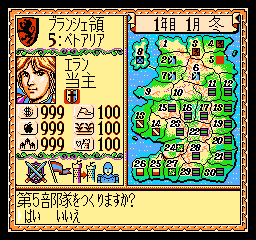 There is a debug functionality that only exists in the Japanese version of this game, as they scrapped it from the US version completely. The extra game menu option "ﾃﾞﾊﾞｯｸﾞ" ("Debug") can be re-enabled with the Game Genie code IGKXEGGG. This option allows you to choose any location on map and set most of its parameters.

The first 8 kilobytes of CHR ROM (offset 0x40010-0x4200F in a .nes format ROM image) are identical to the corresponding data in Bandit Kings of Ancient China. The data consists of an unused 8×8 ASCII and kana font (this game uses an 8×16 font), a few 16×16 kanji (different from the ones used in this game's Japanese version), and some non-graphics data which was apparently placed in CHR ROM in BKoAC because they ran out of PRG ROM space.

Interestingly, the unused data in both versions of Gemfire matches the US version of BKoAC. The Japanese version of BKoAC (Suikoden: Tenmei no Chikai) doesn't have any non-graphics data in CHR ROM, so it has more kanji there instead.

Near the end of the PRG ROM (at offset 0x3FFE0 in a .nes image) is the following ASCII text:

The same text (including the title ROYAL BLOOD) is present in Nobunaga no Yabou: Bushou Fuuunroku (aka Lord of Darkness) and Aoki Ookami to Shiroki Mejika: Genchou Hishi (aka Genghis Khan II). In fact, the last ~3KB of PRG ROM (from 0x3F510 to 0x4000F in Gemfire, from 0x7F510 to 0x8000F in the other two) is completely identical in all three games, except for unused space which is filled with either zeroes or 0xFF depending on the game.

Gemfire and these two were Koei's last three Famicom releases, with Gemfire the last to be released outside Japan.