A year and a half after its initial release, Gex was ported to Windows 95 by the same team that made the PC ports of Earthworm Jim and Pitfall: The Mayan Adventure. 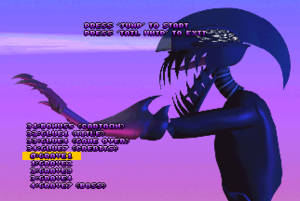 There's also blinking usage instructions, to make up for the lessened amount of choice.

While on any map screen, bring up the remote menu and type hoosierbuddy to access a level select menu for all of the main worlds of the game.

Interestingly, the unused levels from the 3DO game have all been intentionally removed from the list.

The game's secret world, Planet X, is accessible through a separate level select cheat. At the title screen, type partyatroswell to access it.

As with the normal level select, the unused boss fight (SL71) has been removed from the list.

Located in the "MUS" folder, "GEX112.MUS" is a short, vaguely sci-fi-sounding track found nowhere in the game. It may have been intended for the cut boss fight in Planet X.

When the game starts, it deletes these menu items. The patch above prevents the game from doing that.

When activated, it shows the VRAM window. 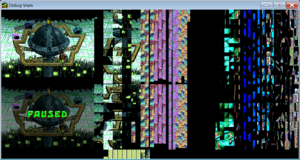 When activated, this menu item only prints to a debugger, like "DebugView" on Windows.

This menu item does nothing.

When activated, a red framerate count appears at the top-middle of the screen. 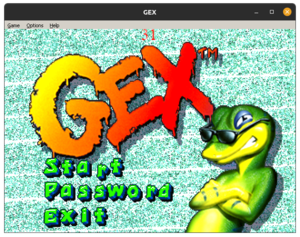