Giana Sisters DS is a sequel to The Great Giana Sisters, although it may be also seen as a remake. A bunch of the original creators were involved with development, and is also notable for being Armin Gessert's last game before his death in 2009. 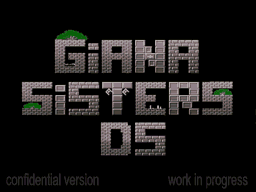 A work-in-progress title screen. The graphics object look similar to the graphics from the Commodore 64 port of The Great Giana Sisters. In the bottom left corner of the picture, it reads "confidential version". 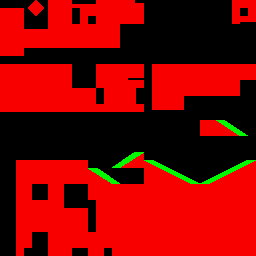 A collision test of some kind.

A level marker that was probably meant to be used to show a level being locked.

A ring for the teleporter. Unknown use.

An unused popping bubble gum tile that can be found in the graphic files of Giana and Punk Giana.

A map screen tip. Unlike the other tips, the border doesn't animate. Also the flags are cut off. There is no text either in the French and Italian version, but there is in the Spanish and German version.

The Spanish version of the tip from above. The text written here is the same from the level completed tip, only showing the first line.

The level has some similarities with level 8-5; both have similar platforms on the top-left of the level and level exits blocked by bricks. The level seems to be completed and ready to be added into the game, unlike Castle08. Why this level went unused is unknown, but probably because of being too similar to other levels.

This one seems to be a WIP, as it lacks many details. It's unused most likely because of being leftover or being unfinished from time constraints. The level is obviously short, but has some difficulty. Strangely, it doesn't contain an exit flag, but has an exit trigger inside the tower.

The banner image is different between regions.