Girls' Frontline is a game about anime girls with guns. Android anime girls. 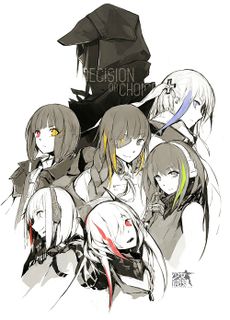 W was ostensibly the sixth member of the Anti‒Rain (AR) Team who was revealed in concept art released by her artist shortly before the game's original release.[13][14] Sometime after, W's artist left MICA Team and cofounded HyperGryph, the development studio responsible for Arknights. Consequently, W's concept was ostensibly recycled for the eponymous Arknights operator W. Since W's artist departed early, W was never actualized as a T-Doll, and thus, only concept art of her remains.

K7 was a 5‒star SMG who was among a batch of several new T-Dolls that MICA Team had announced on March 21, 2018 that they would add after a routine maintenance—the day after.[15][16] Upon K7's announcement, portions of the KR community were outraged upon learning that her artist had reposted controversial statements—made by the online community Megalia—on social media. In response, in the same day MICA Team immediately postponed K7's launch until further notice.[17][18]

Since K7 was cancelled abruptly, her voice lines may not exist since it is possible that MICA Team had not yet recorded them. Strangely, MICA Team has left K7's graphical assets, including but not limited to:

among the game's core assets.

A 3‒star SMG who was planned as a monthly login reward for September 2018, and MICA Team preemptively bundled some of her graphical assets with the game's core assets. KR dataminers ripped KGP-9's graphical assets and ascertained that her full‒body artwork was plagiarized from Poharan, a character from Blade and Soul.[19] Upon learning this, MICA Team postponed KGP-9's launch indefinitely, and the only remnants of her are her full-body and portrait graphics.

Emergent conflicts between MICA Team and Sega led to the abrupt cancellation of the collaboration. Instead, the BlazBlue x GuiltyGear collaboration Operation Rabbit Hunt returned for a second time. Only chibi animations exist for the scrapped T-Dolls.

SCAR was one of the T-Dolls created by her artist for the game post-launch: HG Five-seven, AR FAL, RF Ballista, and MG M1918—all weapons produced and manufactured by FN Herstal. SCAR's artist released a concept illustration depicting some of these T-Dolls shortly after the game's release. All T-Dolls in the image correspond to existing T-Dolls as of May 2022 except the third from the left;[20] since the artist has created designs representing only the FN Herstal armory, the game's community had arrived at the consensus that the unknown T-Doll was SCAR. M1918's MOD story contains the only reference to SCAR:

Why, the fact that we used ready-made technology to upgrade M1918 ... I wonder if SCAR would get mad if she found out? 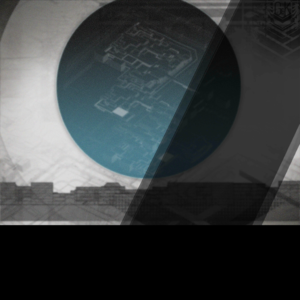 The adjutant system background graphic used before the system's overhaul.

There is an unused background graphic that was used for the adjutant system before it was overhauled in the game client's v2.06 update.

There is an unused graphic that was used for Type 1‒3 Armor Plates. At some unknown point, it was replaced with its current form as of May 2022. Curiously, it appears that the 16LAB variant of the armor plate was created before this replacement: it is composed by stamping the 16LAB logo onto the old graphic.

The game went through a semi‒private closed beta in the months preceding its release in China, featuring early revisions of music tracks that are still used as of May 2022. Closed beta tracks and their modern counterparts differ to varying degree. Some tracks persisted beyond the closed beta, but most have eventually been updated or replaced entirely. All known tracks are listed below:

As of May 2022, the game has a story mode comprising fourteen chapters and seven major campaigns. Except Chapter 0 and the major campaigns, each chapter comprises three modes: normal, emergency, and night. Normal mode comprises six stages and both emergency and night modes each comprise four. Both normal and emergency modes feature the last stage as a boss stage. The gameplay in each stage is split between a map view from which players control their echelons and a combat view in which the player watches their echelons fight the enemy. Each chapter has a key music track that accompanies gameplay, except boss stages which use the same track regardless of the chapter.

However, this was not the case at the game's launch: Chapters 2–4 and 6–7 once used two distinct A- and B-side tracks that would play over the map view and combat view, respectively. The track list of game's official soundtrack implicates the existence of unused tracks for Chapters 1 and 5, but there is no known way of downloading these from the game's CDN.

As of May 2022, these tracks are bundled together in the game's assets but only the B-side tracks are used: they play over both the map and combat views.

Each regional client uses its own localized text mappings; regardless, each client receives a copy of every region's text mappings. Within each region's text mapper file—LanguageData.txt (CN) or LanguageData_[HK (HK/TW, JP, KR, EN)—is a region of text denoted UNITED_FORCE. A cursory inspection of the text lines suggests that there is, or once was, a planned guild‒like system like that of Azur Lane's. Independent historical sources date these texts back at to least mid‒2019.[22][23]

The text provides detail sufficient to reconstruct how the company system would work. The feature would be available when one reached Level 20, upon which one could either create their own company or join another. Creating a company would incur resource costs, but it would allow one to administer their own company as captain. Joining a company would be done either through application or invitation, and it would require one to pass a minimum level requirement and a manual approval period, though this could be bypassed with a high enough level.

A company would be analogous to a guild in Azur Lane: it would have a social hierarchy of, in descending order of rank: a single captain, vice captains, elites, and members. It seems that vice captains could be elected, though the exact process is unclear. Captains can transfer ownership and can also be impeached by vote from prolonged inactivity. All members would ostensibly have the ability to voluntarily withdraw from or be kicked out of the company. There would also be a chat system similar to that of Azur Lane.

A company would also incorporate a shared buildings mechanic like the Theater system, though the details are unknown.

M4A1 has a unique line that is unlocked after upgrading her to MOD 3 by oathing her. The only way to trigger this line is to intentionally replay the line from the index or to slowly raise her level to 115 without first oathing her, so this line will virtually never be seen.

Some dolls' MOD 3 upgrades introduce minor changes to their respective oath lines. The MOD 3 upgrade usually adds only unique adjutant and upgrade lines, so the oath lines could be copies from an earlier translation that were overlooked.

CN is currently far ahead of EN, but untranslated CN data is still in EN clients. The clients share most of same code.

This collab only came out in the Chinese regions and was never re-run again due to licensing issues. Luckily it has been fully fan translated and can be read through online (though not played). In it, the player would play as Kiana Kaslana from Houkai Gakuen 2nd and take command of the T-Dolls along with a fairly lengthy story about PP-90 and Vector's friendship.

The characters and their dialogue have been translated into English in the game's files, although some of it is mistranslated.

Curiously, downloading the Japanese version of the game shows the text in the files (avgtxt/-14) has been replaced with numbers. Most likely the text was run through a tool to map each line of dialogue to an ID, but this event was left alone since the developers already knew it would never be translated.

If one interacts with a T-Doll in the index page, they will give a brief introduction. In CN, this introduction is different from the dialogue used upon obtaining the T-Doll. However, in EN, both the introduction and obtain dialogue are identical with the occasional subtle changes; this does not apply to T-Dolls with a MOD upgrade.

Some gun names in EN differ from their real counterparts either to avoid licensing and copyright issues or to simply shorten the name; some name changes reverse the original change altogether. (Note: Not finished, KR/JP information is missing. Also the game only has Japanese voice acting, but CN names are voiced? Need to check.)

In CN and EN, controversial (e.g., sexual, political) content in T-Doll character graphics is censored by default. To uncensor the game, one can craft a special voodoo recipe in the T-Doll factory menu and then close the game: reopening the game will initiate a small download containing the uncensored graphics.

Internally, some T-Dolls use the original or shortened names of their real counterparts, likely to avoid issues with licensing or copyrights.

Bosses can have health thresholds that trigger some in‒game event, like a boss's special ability or the playback of a voice line. Upon passing the death gate (i.e., health is in some arbitrary integer range close to 0), bosses are programmed to say one of two pre‒chosen death lines; they also say this same line when their health is at most zero. Thus, if one manages to drop a boss's health in this range, one can force the boss to spam their voice line at least once before death. If the boss is invincible—a common temporary buff granted by activating their skill—then the voice lines can be spammed as quickly as one can deal fatal damage.

If the Android Debug Bridge (ADB) port is in use, the game will crash at the title screen. One can trivially bypass this check by connecting through the ADB port after logging into the game.

Additionally, if a Frida server is running on its default port, the game will crash on startup.