Gobbledygooks is an unfinished top-down puzzle game reminiscent of The Tinies. Instead of directly maneuvering the color-coded fuzzballs, you manipulate the environment to guide their paths.

A 12-level demo is all that was released.

STR# 666 is titled "You naughty person. You discovered all the passwords!!"

Inside are the (editable) passwords for skipping to each level, plus a thirteenth "SECRET LEVEL!!!" only accessible by discovering this resource. The bonus password is: 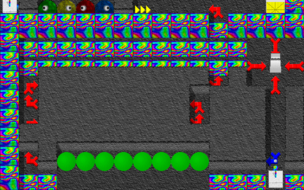 The secret level affords you 1 minute and 50 laser shots, but no exit and therefore no way to win. It does let you experiment with elements omitted from the demo levels, such as mirrors, antennas, and crystals (all detailed further down this page).

An alternative (and much less 3D) overworld map, with 24 levels instead of 12.

All of the usable levels are stored in the Gobbledygooks levels file, but another 18 "levl" resources are stashed inside the application itself. They can be played by substituting them for the official levels with a resource editor.

Many of these have no exit or are otherwise impossible to complete. 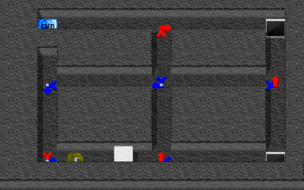 This is the only one of the inaccessible levels with unique laser and time values (5 shots and 3 minutes). All the others allow you 15 shots and 2 minutes. 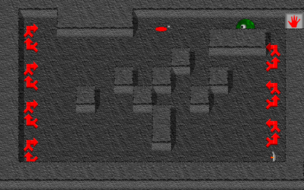 The button (upper middle) fires the laser (lower right), which snakes back and forth via the red arrows. 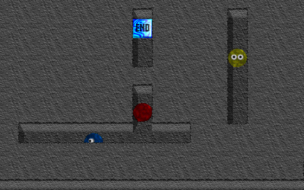 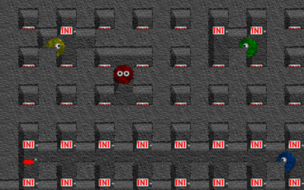 When the blue gobbledygook reaches the button, all TNT on the screen goes off. There are no survivors. 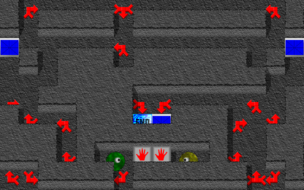 This is the first of several unused levels whose names suggest they were considered for inclusion in the finished product. 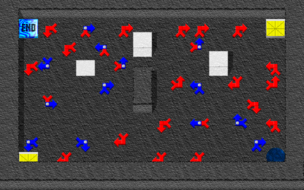 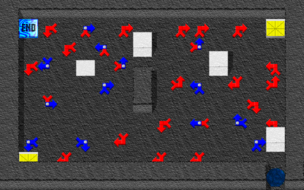 Identical to previous, but for the lower right corner.

This one did in fact make it into the game, with minor changes, as Level 5 ("Double Trouble"). 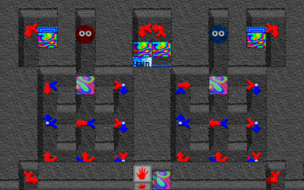 This level also appears in the demo, as Level 12 ("The foursome"). 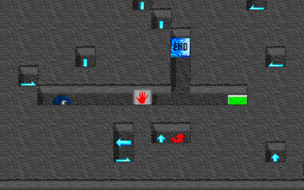 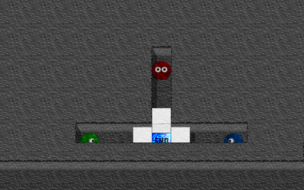 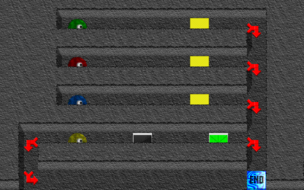 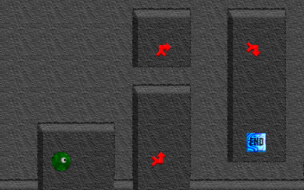 As the title indicates, this one is full of color-cycling objects. 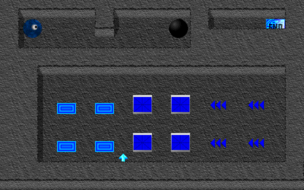 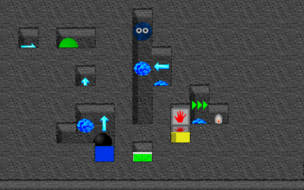 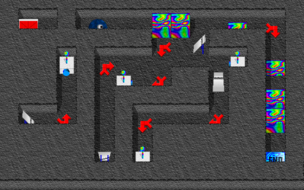 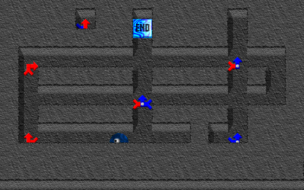 There are four variations on this object, each facing a different direction. Gobbledygooks pass them with no effect, but when the blue lens(?) is struck by a laser beam, the antenna sends a signal that raises or lowers all magic blocks on the level.

The north- and east-facing versions appear on the secret level, and all four appear on one of the inaccessible levels.

When hit from above by your laser beam, a mirror will deflect it onto the plane of the level.

Because the game renders white pixels as transparent, mirrors in-game have a see-through band where there should be a highlight.

Nothing is known about these, except that one of the unused levels contains four of them. They don't do anything when a gobbledygook passes over them.

A row of nine of these can be revealed on the secret level by blasting away the gray stone on the fifth row down. They strongly resemble the bonus crystals in Crystal Quest.

Without a way to move the gobbledygooks on that level out of the top row, we don't know whether picking them up grants time, laser shots, or what.

Graphics Not Used at All

Horizontal elevated arrows appear on Level 11, but their vertical counterparts are nowhere to be found.

This differently-colored button isn't used in any level, accessible or not.

The texture on the rightmost circles matches the leftmost ones, but shifted one pixel over. That's all I can tell you.

A wall sprite from the same developer's Unicycle!

A red X is part of the "objects" sprite sheet.