In addition to Godzilla and Mothra, two other monsters were intended to be playable at one point, but were cut for unknown reasons.

Anguirus (known as Angilas in-game) can be accessed by freezing RAM address $0127 at 03. Although he is mostly playable, he has no attack animations or special attack, is almost completely invulnerable to damage, and can cause the game to crash under certain circumstances. When fighting against enemy monsters, his sprite will be placed much higher on the screen than normal, which can make landing hits either very difficult or impossible (depending on the enemy).

Angilas' sprites can only be seen in the Japanese version, as they were removed to make room for title screen graphics in the international versions.

Rodan can be accessed by freezing RAM address $0127 at 02. Unfortunately, his programming is even less complete than Angilas': when attempting to play as him, levels will be "skipped" instantly, and fights against enemy monsters will crash the game.

Rodan's sprites and palettes do exist in the Japanese and international versions, though only the latter is properly loaded by the game when entering levels and enemy battles. 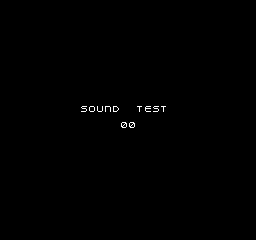 Enter the password S0UND (with a zero) for the game's hidden sound test.

This song can be heard by freezing RAM address $CC at 16 and causing a music track change (entering a level, for example).

This song can be heard by entering X Y S on the password screen where it will play in the debug room.

The Japanese version starts with a couple of copyright/credit screens, whereas the international versions put this information on the title screen instead. The extra screens can still be viewed in the US version by using the Game Genie code GAVYNOGK.

The title screen is different between the Japanese and international versions.

The title animation was also changed. In the Japanese version, Godzilla's eyes appear in the darkness, followed by the rest of his body, after which the title pops onto the screen. In the international versions, the "Godzilla" text appears in black on a dark red background, which fades into the actual title screen.

The Japanese version also uses unique music tracks for both the title and intro screens, which were changed to the themes used for Planet X and Mars (respectively) in other releases. Both of these songs were composed by Akira Ifukube, a composer for the Godzilla films, so they may have been removed due to licensing issues. The tracks can still be heard in the international versions' sound test as tracks 00 and 01.

The password screen of the Japanese version uses Compile's own lettering and makes the numbers red. Other versions use a different type and a uniform color.