Goosebumps: Attack of the Mutant

Goosebumps: Attack of the Mutant is a first person adventure game based on the novel of the same name, and is the second in the series of Goosebumps games published by DreamWorks Interactive. Oh, and it features voices from famous celebrities such as Adam West and Jim Belushi.

A short and rather sloppy rendition of the Goosebumps theme song.

A very low quality track that goes unused during gameplay. A more complete version can be heard in the game's opening cutscene.

As with "UPSLO8", this is a very low quality version of a track heard in one of the game's later cutscenes.

Pretty self explanatory. A voice saying "Armor Low". It's unlikely that this was intended to be used in-game, as the clip originates from the game Assassin 2015, which BlueSky Software released a year prior and runs on the same engine as Attack of the Mutant.

Probably the most interesting of the three, this cutscene depicts the Character "Feedback" dying after his encounter with Root Rot.

This cutscene depicts a blue gun being taken from the player, which is not obtainable in-game. The Masked Mutant's laughter is notably absent, which is usually heard during these sequences.

This cutscene depicts an alternate version of Wartlock's blaster being taken from the player. Like 92.SMK, the Masked Mutant's laughter is again absent.

A pre-final version of the Slima-Juice tank can be found within the RES file contained in the "R" subfolder of the data folder. 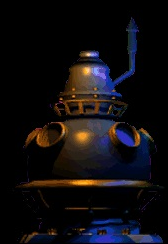 The Slima-Juice Tank as depicted in a development storyboard.

References to a test map can be found within the game's code. At the moment, there is no known method of accessing it.

The test room text can be found at 4D59B3, in an internal level list.

Previously thought to be inaccessible, It has been discovered that a debug mode can be activated by launching the game executable through terminal with the command-line argument "abracadabra". The commands, which are toggleable in-game by pressing F1, are listed below.