Gorby no Pipeline Daisakusen is a puzzle game where the player connects a pipeline between Tokyo and Moscow. Gorbachev himself appears in the title screen only.

Play the game. Score enough points to be sure to get to 2nd place for both "SCORE" and "STAGE" rankings of the "RECORD TABLE". Finish the game before you get to 1st place. You'll be asked for a name. Enter "STF". Press Start, then on the Level Select menu, press Left exactly 29 times. Press either A/B or Start to see the Staff screen not shown anywhere else during the game. 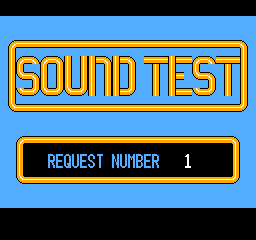 Play the game. Score enough points to get to 1st place for both "SCORE" and "STAGE" rankings of the "RECORD TABLE". When asked for a name, enter "SDT". Press Start, then on the Level Select menu, highlight the "LEVEL 2" option and press either A/B or Start to get to the "SOUND TEST" screen. There are 3 tracks from Zanac unused in this game.

This fanfare sound is used as the 1-up sound in Compile's own Gun-Nac.

There is unused text at address 0xF7E5. The text is not related to this game. It appears to be part of an early script from Little Master: Raikubaan no Densetsu, a Game Boy game also published by Tokuma Shoten.
Control characters appear as garbage in the text below. "@" is used to switch between hiragana and katakana.