The NES version of Gradius introduced the famous "Konami Code": Up, Up, Down, Down, Left, Right, Left, Right, B, A. The world would never be the same. 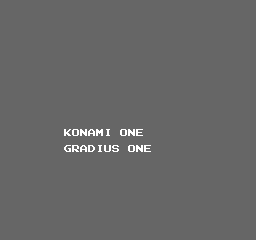 The same method is used with the CHR data integrity status to show "GRADIUS ONE" or "GRADIUS TEN". The European version fails the CHR check, despite using the same CHR ROM as the USA version.

Similar tests appear in other Konami NES games such as Ganbare Goemon!, The Goonies II, and King Kong 2.

At the beginning of the PRG ROM is this string:

The Japanese version's title screen displays the high score and uses the old Konami logo that was in use from 1981-1986. The European title screen introduces a graphical error on the right-hand side of the Gradius logo: a diagonal tile was mistakenly used instead of a curved one.

In the Japanese version, you get different congratulatory messages depending how many times you finish the game (up to six times). This was removed in the international versions.

Konami released a special promotional version of Gradius to tie in with an instant ramen noodle brand called Archimendes. It's basically the same game, but the powerup capsules are replaced with ramen boxes. The ending message is also different. Instead of the 6 congratulatory messages in the original release, you only get one:

The game was released for the Nintendo VS. System in the Arcades. The only difference is a different copyright on the title screen, and to continue you only have to insert credits, the continue code is no longer necessary.

In November of 2018, a ROMhack savestate special version of Gradius called Gradius SP was released for the Nintendo Switch’s collection of NES games available to Nintendo Switch Online users. The game can be started at stage 5 with the strongest equipment.