The first two games were difficult enough, but Gradius III goes out of its way to make its stages more hair-pullingly hard than ever before, and not even in a balanced way!

There are eight Edit Mode icons in the game's ROM for power-ups that were cut, some of which previously appeared on the spin-off games. Unfortunately, none of them seem to have been properly coded, so the icons are all that's left of them.

A new design for the "Zub" enemies that appear in large numbers on the last stage. The final game reuses the design from Gradius II.

Returning Enemies
Enemies from previous Gradius games and spin-offs. Most of the graphics are ripped directly from those games, and it's not clear whether or not they were actually intended to be used in the game. The only exception is the small Moai head from the Japanese Life Force re-release of Salamander, which has new graphics and was probably meant to appear somewhere in the game proper.

The blue screen-clearing power capsules seen in previous Gradius games are conspicuously absent in this one. They did make it into the SNES port, albeit as a palette swap of the power-up capsules instead of having a separate design.

Two unused enemy hatch designs, both of which have the same retractable base.

Two unused rock designs for use in Stage 3's underground section. Even though there are three different designs, the final game only uses one of them. Kind of a waste, eh?

Small and large boulders, likely meant to be used in Stage 3's digging section. Even though they both have special falling animations, the final game still uses the same rock design used everywhere else in the stage, which isn't even animated!

Rock pillars of varying thickness. Could have made good obstacles in the underground section. Maybe they could have dropped down from the ceiling or jutted up from the floor or something? No such luck, though.

Small and large vines shriveling up, which would have been used after the Choking Weed boss is defeated. In the actual game, those vines just explode like everything else does.

A whole mess of non-cubical crystals. Similar, less-detailed crystals appear in Stage 3 of Gradius II as destructible objects. At one point in development, the Crystal Maze might have been more closely based on Gradius II's Crystal stage.

The palette for this object is loaded during the "flying big crystal cubes" section of the Crystal Maze, so it might have been meant to appear as an added obstacle there. Dig that 12-sided die!

The ships from the first Gradius and Salamander are in the ROM. The Gradius ship uses the default ship palette, while the Salamander ship actually has a custom palette loading during the Salamander stage (palette 16) that's not used by any other object in the game.

It's plausible that in the Gradius and Salamander stages, those ships would be used in place of this game's standard Vic Viper design. It would certainly explain why the player loses all of their power-ups after being transported to either stage.

The volcanic rocks used in the previous Gradius games. Uses palette 1B in the Gradius stage, which, again, isn't used by any other object. The developers might have originally planned to keep the volcanic eruption that prefaced the Big Core boss fight in the first game.

Small and large blue plasma balls in the same style as the energy balls shot out by Bacterion at the end of the game. Purpose unknown.

A strange metal disc. No clue on this one, and that's probably not even the correct palette. Weird.

These filler tiles are in the Cell stage tileset. アキ means "empty".

In the international releases of the previous Gradius games, the "Option" power-up was called "Multiple". Since this game was never released in Europe or North America, this graphic was never used. Oddly enough, though, this game's announcer always only says Multiple when selecting the power-up.

High Score numbers from Gradius and Gradius II, respectively. Gradius III has its own, larger font that it uses for the High Score table, making these graphics superfluous.

In Gradius II, players could enter their gender and age in the High Score table. This feature was taken out in this game, which instead uses the differently-gendered heads and horoscope icons from the first Gradius, but the differently-aged heads from Gradius II are still in the ROM.

While the Crystal Maze stage in the final game only uses blue crystal cubes (seen on the bottom right), there are palettes for at least four other colors: green, purple, yellow, and gray. The cubes on the left are the sprite-based cubes, while the cubes on the right are the tile-based cubes.

The small vines that the Choking Weed sucks up actually use the wrong palette! Palette 1D is used by the Choking Weed's bulb, while palette 1E is totally unused in-game and fits the vine graphic a lot better.

The IDs listed here are internal track IDs and don't match up to the ones used in the game's sound test. 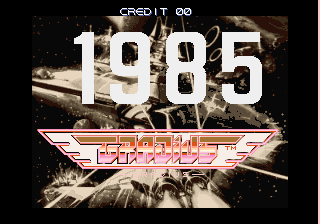 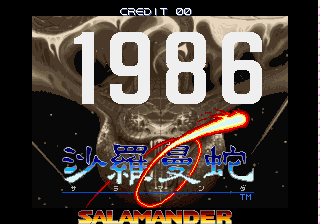 The Japanese version goes through a pictorial history of the Gradius series (the arcade games, anyway) before transitioning to this game's title screen image. In other sets, the intro remains the game's title image the whole time, but the sequence is the same length, leading to an odd experience in non-Japanese sets where the game just stays on a static image for almost a minute before the music ends. 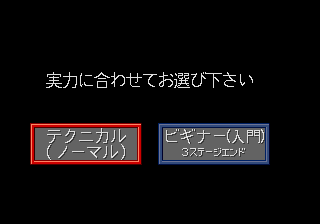 The Japanese sets have an additional mode selection before the Weapon Select screen. The option on the left is the normal game, while the option on the right is a special Beginner mode that ends after Stage 3. Apart from the limited stages to be played, players gradually lose whatever power-up they have equipped with each death as opposed to the series' traditional die-and-have-nothing that is also present in the Normal mode: first, the players lose all their "Option" orbs, and then the rest of the power-ups that preface that one in the meter (Laser, Double, Missile, and Speedup).

Despite the fact that non-Japanese sets don't have this selection and the player is thrown into the full game directly, the gradual power-up losing routine from the Japanese version's Beginner mode is present in them and is in it throughout the whole game, making them the slightly (big emphasis on that word) easier versions of this game. 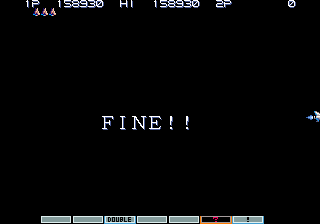 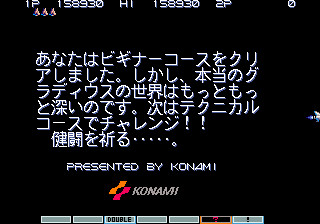 You've cleared the beginner course.
But the world of Gradius is much more
than just that. Now try challenging
yourself with the technical course!!
We pray for your success...

After defeating the boss of Stage 3, a special message appears.