Known as Gran Turismo 2000 during development, Gran Turismo 3: A-Spec has less tracks and cars compared to its predecessor, but it went on to become an instant hit.

As well as the selectable car classes of C, B, A, S, and Dirt, the Arcade mode features two hidden car classes. CLASS_COMPULSARY contains the specific cars used for the Time Trial mode, whereas CLASS_PREVIEW (video shown on the right) contains almost every car in the game, including unused and test cars. This was presumably used as a debugging tool.

Multiple unused cars exist on the game disc, in varying levels of completeness. Those listed below have complete enough parts and physics data to be purchasable and drivable:

"Sample" cars were intended for debugging and testing purposes, and as above have enough parts and physics data to be drivable. There are 10 "sample" cars in total:

Several car models with no associated names, parts, or physics settings were also left on the game disc. Note that these models have been swapped onto other cars for the purpose of illustration.

The game menus include the filenames for several blank and unused car logos. This list includes a Bugatti EB110 (shown in an interview), HSV Clubsport R8, Mazda RX-EVOLV (mentioned in the Mazda RX-8's car description), and a duplicate Lancia Delta HF Integrale (possibly the road car; re-added in GT4). R50 may refer to the 2000 model first generation Mini Cooper that was launched by BMW after the original Mini brand was retired, however this car didn't appear until Gran Turismo Concept, and even then that was the 2002 model. No other remnants of these cars exist.

Several of these filenames have a year suffix of '00', however this is frequently used in the game for cars with no set model year.

There are three sets of rims that were unused in the retail version of the game:

As with every Gran Turismo game, regional differences exist. The introduction movie has the usual different background music: the Japanese version used a new Moon Over The Castle arranged by pentagon, the North American version used a specially-mixed version of Lenny Kravitz's Are You Gonna Go My Way (also appears in races), and the PAL versions use Feeder's Just A Day. 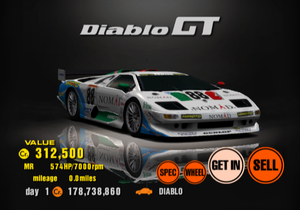 The Diablo JGTC, hidden in the US version.

The Lamborghini Diablo JGTC was featured as a prize car and opponent car in the Japanese version of the game. The car was licensed via the Japanese Lamborghini Owners' Club (JLOC), which ran the car in JGTC, rather than Lamborghini itself. Due to the legal risks and uncertainty of using this loophole, the car was hidden in the US version before its model was removed in the PAL version. Lamborghinis officially appeared in Gran Turismo (PSP) but this particular car did not return until Gran Turismo 5.

The Japanese and North American versions had six unlicensed Formula One cars, while the PAL versions had only two. In addition, the cars are more identifiable in the US and Japanese version of the game, using the FCYY/D format (C stands for cylinder, YY stands for year, and D stands for driver). The cars in the US and Japanese version of the game are called the F686/M (Nigel Mansell's Williams FW11), the F687/S (Ayrton Senna's Lotus 99T), the F688/S (Senna's McLaren MP4/4), the F090/S (Senna's McLaren MP4/5B), the F094/S (Senna's Williams FW15), and the F094/H (Damon Hill's Williams FW15B). The PAL versions' F1 cars are the Polyphony001 (an F094/S with higher nose and slightly different rear wing) and the Polyphony002 (the F688/S with different rear wing and more color choices to compensate).

The PAL version has Vauxhall cars in it, but it requires the language set to (British) English. Also, the US version has Exxon instead of Esso, just like Gran Turismo 2.

An often overlooked difference exists in the Team Oreca Viper: the US version has the car number 91 on the doors and Dodge in the windshield. All other versions has the car number 51 and Chrysler (parent company of Dodge) in the windshield. PlayStation logos are also present in the Chrysler versions, while they are nowhere to be seen on the Dodge. The Dodge version sports a small American Le Mans Series logo on the doors and hood, while the Chrysler version has the 24 Hours of Le Mans logo instead. (These logos were replaced by the Gran Turismo logo from Gran Turismo 4 onwards.)

Another change from the Japanese version occurs with the Integra Type-R '98's power band. It increased from 0-9,000rpm to 0-10,000rpm in the other regions. This change has the knock-on effect of increasing its acceleration while its HP and torque numbers remain the same. The power band change (but not the acceleration) also affects both the Subaru Impreza WRX '00 and its Sports Wagon STi counterpart.

As the Lamborghini Diablo JGTC was removed from the international release, all instances of the Diablo were replaced instead with the Zonda Race Car, including its usage as a prize car in certain events that could grant you the Diablo.

In particular, the Italian Avant Garde event featured both the Zonda Race Car and the Diablo JGTC in its event image in the original Japanese release, alongside being an opponent car one could race against. This event originally allowed all Italian cars to be raced in the event, but was updated in its international releases to only allow Pagani Zonda variants to be raced.

In Gran Turismo/Simulation mode, some prize monies were adjusted between the Japanese and the other versions. Note that in the Japanese version, the prize values are multiplied by 100. They're listed here in their base value for easier comparison. Positions not listed award the same prize.

The bug in which 4th place prize money in the Beginner Evolution Meeting is more than 3rd place remains in all versions.

As well as selecting the number of laps, the difficulty levels also nerfs the opposition cars performance to varying degrees. These degrees are also different between regions. Professional level involves no nerfs in any version.

Here's some in-race music that wasn't featured in every version: