In the CARS folder, there are files (cleverly) named SCARS.PCX and SCARSn.PCX (n is a number between 0 to 12) that contains fragments of dirty/damaged cars when viewed from top, intended to be used during the pit screen and related to the Repair button in the mid-race pit menu. Even if you manage to have a worn-out external part that would enable repairing of it, it will not affect the car in the pit screen. The team-specific SCARS files would have been overlaid to pristine car image (CAROVRn.PCX), as shown on the right row.

The SCARS.PCX file is universal and would have been applied to any car, to give further impression of further damage. Both could be usable together, leading to one of the following situations (demonstrated using the Benetton car):

This file, WELCOME.EDY, is the default EDY inputted in the EDY Viewer in Option 13 (see below). It never appears in playable sections of the game, since it is meant to welcome the player accessing the debug feature.

This file also appears in GPM1.

TD_WINPT.PCX and TD_WINP2.PCX appears with this picture of Martin Brundle in a Jordan. The full image is a 640x460 image with the picture located amongst a sea of green. In TD_WINPT.PCX, the picture is placed at 374x158; TD_WINP2 shifts it 24 pixels to the left.

This picture also appears in the first Grand Prix Manager game with the exact same properties, but instead it's a picture of David Coulthard driving his Williams. 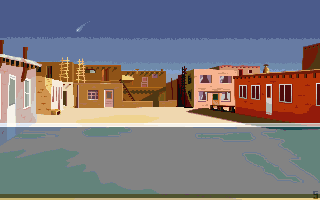 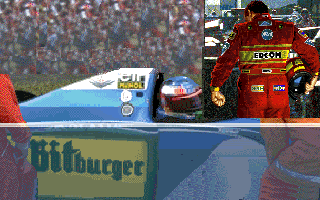 Alternate TV Studio "test" screens, the first depicting some houses and the other using some pictures from GPM1. The used one is simply the FIA logo. 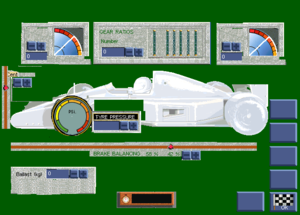 An early, incomplete Car Setup screen, using assets from GPM1. It should be noted that GPM1 does not have a Car Setup screen on its own; rather car settings are changed in Car Internals and Car Externals screens.

There are two menus that lead to debug-related functions in the game.

Type iamacheat on the main screen to access the following cheat and debug features:

To access Option 13, click on the white area on the left of the newspaper's date. You will be then prompted to enter a password. Enter any of the following passwords below to use the function. (Option 13 is a reference to Benetton's alleged launch control system - a banned driver aid - during the 1994 Formula One season.) 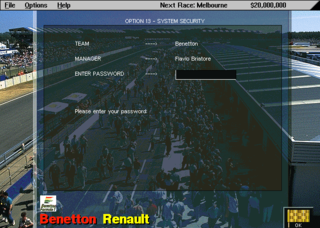 NEWSPICS.TXT contains a developer memo from an unknown developer, directed to Edward Grabowski, about newspaper pictures, again for the first Grand Prix Manager game. Not all of those pictures mentioned here appear in the final version of Grand Prix Manager.

It should be noted that neither of those files appear in GPM1's folders.

Version 1.02B fixes a bug that increased the likelihood of retirements caused by car electronics if the levels of driver aids are equal or higher than the car's EMS.