A port of the very same game from the PlayStation Portable version with minor fixes and worse controls.

An early Mission Complete theme is present on the disc. It's a clip from the intro cutscene of the game, with the sound effects from the cutscene still there, hinting that it might just have been a placeholder.

Leftover title cards from Vice City, placeholder loading screens, PSP save background and unused screens for a TV newscast about the closing/opening of the bridges are present on the PS2 disc.

Some leftover debug textures can be found on some .chk files.

Some of the mission scripts contain placeholder lines or pieces of cut dialogue. Audio for some of them also still remain in the game.

This placeholder string also appears in the scripts for Shop 'til You Strop, A Walk In the Park, Caught In the Act, Search and Rescue, No Money, Mo' Problems, Passion of the Heist, False Idols, Munitions Dump and A Date With Death.

An additional line for the dealer.

Vincenzo doesn't provide you with anything during the mission.

An alternate take of the line "Fuck him! He made his choice."

Additional dialogue for the end of the mission.

An unused objective. The game tells you to go straight to the freighters instead.

A placeholder clip of a robotic voice reading out the filename.

Unused strings of unknown purpose. They appear again in the script for Rough Justice.

Additional lines for the Leones.

Text for a Jump Speed meter, presumably for jumping the unfinished bridge during the mission.

An additional line for the news report at the end of the mission.

Some lines that are, you guessed it, not used.

Text for a countdown timer that doesn't appear in the mission.

Calm Before the Storm

A placeholder clip of a robotic voice reading out the filename.

Shop 'til You Strop

While you do get your tires shot during the mission, this dialogue isn't used. The script for the mission has no text for the lines either.

Alternate lines for Casa getting caught.

No Son of Mine

Unused objectives suggesting that the mission originally took place at Saint Mark's Bistro instead of the Cipriani restaurant.

A short unused line of someone telling Toni that Leon's debt has been repaid. No text for these lines exist in the mission script.

Alternate lines for the informant. No audio exists for these lines.

An alternate version of the first call Toni receives from Toshiko.

Unknown where this could have been used.

You meet Kazuki at the top of his casino, no chance is given for him to get spooked.

A description of the mission, most likely a leftover from when the mission was first being worked on.

Love On the Rocks

Another piece of text describing the mission.

After the mission Dead Reckoning, Donald calls Toni from a flophouse on his last dime and the call cuts out abruptly. This was more than likely meant to be played at the end of that call.

Unknown where this would have been used.

Additional lines for Ned Burner being confronted by Toni.

Love on the Run

An objective that simply wasn't used in the final mission.

Text for when the radio cuts out while doing the Paramedic or Vigilante side-missions, which is something that doesn't happen.

Police boats are in the game, but are never used by the LCPD. However, unused quotes for the coast guard can be found in the files.

It seems that the player was originally going to have to pick up a change of clothes at Mr.Benz, instead of the safehouse.

You cannot name your save files in either version.

Radio stations are cycled with the R3 button.

Among the debug text above, the "Sick Fuck" strings from GTA 3 are present.

Some unused vehicles mentioned in ENGLISH.GXT.

Oddly, there are some assets leftover from Vice City.

The radio stations and two assets are listed in ENGLISH.GXT among the Map Legends, oddly enough.

The intro title cards are present on the disc and some HUD icons are stored in GAME.DTZ, but are corrupted. 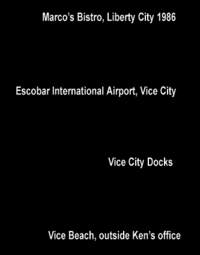 Various lines of dialogue are also present. The original format contained offsets specifying the start and end position of a loop, but when moving them to this new format caused them to be lost, causing the sounds to loop multiple times, until fading out.