From The Cutting Room Floor
Jump to navigation Jump to search
Translate this page
Outdated translations are marked like this.
Other languages:
English • ‎español • ‎italiano • ‎português do Brasil • ‎日本語 • ‎한국어

Guerrilla War is (more or less) an NES port of the arcade game of the same name. Any similarities to the Cuban Revolution are purely coincidental.

Some messages from the programmers are located at 00F8BD (US version) and 00FB8F (Japanese version) in the ROM:

"Athena, ready to go!" (± some words) is a line from Psycho Soldier, another SNK game. 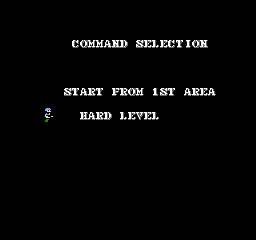 Hold A + B when selecting the number of players for this menu, with a difficulty and stage selection. Note that all stages except the last are accessible here. 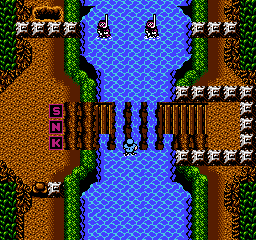 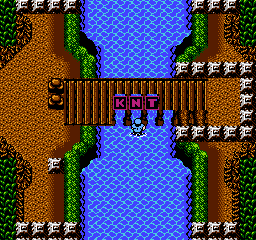 These hidden powerups in stage 3 are arranged to spell out the developer/publisher name (SNK) and the main programmer's pseudonym (KNT). Note that some of the powerups may fail to spawn due to sprite overload. 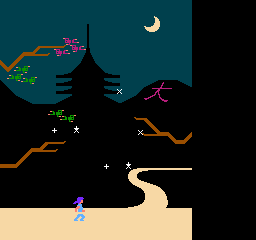 A minigame based on Sasuke vs. Commander, an early SNK arcade game, is hidden inside the Japanese version. To access it, do the following:

The ROM also includes the necessary font and space in the side bar for a score, an alternate screen layout, and multiple frames of animation for Sasuke and the ninjas, but none of it was used. It's likely that the developers had planned a more full-fledged port, but simply ran out of time.

Most of the game's graphics and screen layouts remain in the US ROM, but the program code was either disabled or removed.

While the game does not display your score, the main game will display it in place of your high score.