Guilty Gear Xrd -SIGN- is the console port of the arcade game of the same name, which dug the old fighting game series out of a decade-long hiatus.

Gold versions (just like the EX versions in former Guilty Gear games) and red-eyed "Black" versions of every character in the game (excluding Leo and Ramlethal) are present on the disc, but inaccessible.

On console versions, the only way the player can have access to it is if the PlayStation, for some reason, fails to load the last update patches while booting up the game. It unlocks the colors, swaps Leo's artwork with his unused one, and makes the game crash if the player attempts to play on Leo's stage.

On PC version, these colors are also present in the files and unused, but accessible through mods.

An early prototype of Leo's portrait can be found in the game data. It's just a rough colored sketch of Leo standing. 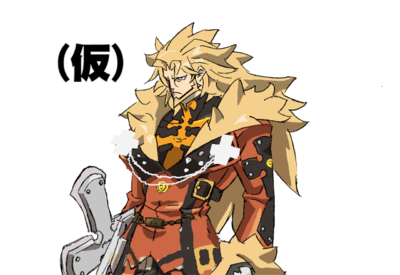 Leo's placeholder on M.O.M. mode map. This is Sol's M.O.M. icon with LEO watermark over it.