Gun.Smoke: The sheriff has been shot! Are you a bad enough dude to mow down hundreds of Old West outlaws and serve some frontier justice?

Basically, it's kind of like Commando in the 19th century. It's also the spiritual predecessor to Red Dead Revolver, so there's something. 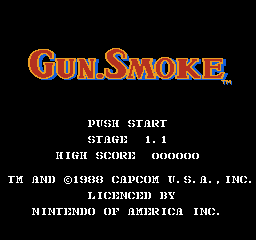 Use the Game Genie codes PUULPANG + KZKLGPVV (US version) to access this stage select at the title screen. Use A and B to select a stage prior to starting the game.

Holding Select + Up when starting the game will also give you the ability to aim using the D-Pad instead of the individual A / B buttons, a feature which is normally unlocked using a longer button code.

Besides the copyright differences, the international versions title screens displays the high score.

While the main storyline is written in Japanese, the opening words are in English in both versions. These were changed for the NES version.

The portraits on the wanted posters were greatly enhanced in the NES version.

In the Japanese version, you get different messages for every time you finish the game. In the international versions, the first and second run messages were removed and the Capcom logo was replaced by text.

The Japanese version does not provide any continues, and the Push Start notice simply takes you back to the first level. The international versions provide you with unlimited continues and add a "Retry" option, which actually just takes you back to the title screen. Also, the palette animation on the game over text received an update.

These missing tracks were included in the NES versions outside of Japan.