The third second Hamtaro adventure game where you and your totally just friends partner, Bijou, have to restore the love and friendships between hamsters destroyed by the evil Spat.

The following text is found at 0x6ADC6C in the Japanese version, 0x6CA1C8 in the US version and 0x8FDFC8 in the European version:

A soundalike of "My Heart Will Go On" by Celine Dion that was intended to be played during the Titanic cutscene (see below for more information).

An overworld theme that sounds like it'd be used in a haunted carnival house of some sort. As there's both a carnival and a haunted house level in the game, this likely isn't a coincidence. 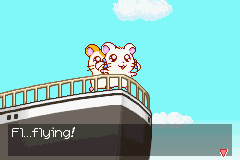 This cutscene was supposed to be played during the boat trip in Sandy Bay. It is present in all versions of the game, and is translated for all the languages that the game supports. The scene depicted, the positions of Hamtaro and Bijou, as well as the text make it a clear reference to the "I'm Flying" scene from the Titanic movie of James Cameron (1997).

There is a way to watch it in-game with cheat codes: 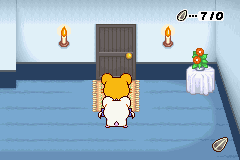 and you will see the cutscene.

There are several unused data for the word "Giftee" (Give). The word was not used in this game but it's possible it was originally intended to be used.

Among the sprites used in the game, there are seven unused sprites of hamsters in a gift box. Three of them are in Hamtaro's sprite table, two in Bijou's table and the last two in Broski's table. They resemble the sprites used in Hamtaro: Ham-Hams Unite! for the Ham-Chat word "Giftee", as these also featured the hamster using the word popping out of a gift box. The fact that it is also in Broski's table indicates that he was the one who was supposed to teach you that word. However, it is unknown what he would have given to you.

An early version of the "Giftee" animation can be triggered in Broski's dialogues, changing the byte at address 0x488DAD to 0E in an US ROM. The first present sprite uses the wrong palette, and unlike other Ham-Chats, no animation sound is played.

There isn't any dialogue related to Broski teaching you the word. However, there is an alternative line in the Japanese version using this Ham-Chat ("プレーぜる") when you give the orange hibiscus to the captain in Sandy Bay.

This was changed to "present" since the word was no longer in the game. It can be accessed by changing the byte at address 0x08FE8E to B3.

This line was also translated in other languages. Due to the fact that it is not a real word, they translated it by what it sounded like in the US version, so "pretzel" ("プレーぜる" is "purezzeru"). In the European version, they also translated the word by the equivalent of "pretzel" in every language.

Among the character faces sprites, there is one for a hooded hamster that doesn't appear in the game. It may be a fully-cloaked portrayal of Hamstarr (who appeared in Rainbow Rescue). This character doesn't seem to have any other sprite. 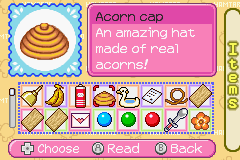 The player can never obtain Seedric's acorn cap through normal gameplay, so the item, its inventory description, and graphics go unused.

The Nintendo logo (appearing before the title screen) is differently sized between both of the English versions. The original Japanese release did not feature a Nintendo logo at all.

The Japanese version has two rotating stars to indicate which option is selected while the international versions use only one. The options are also centered rather than left aligned.

A smaller font is used when displaying names and descriptions of the items in the European version than in the US version.

Like the previous title, the Japanese release features an arrangement of "Tottoko no Uta", Hamtaro's Japanese opening, while the American and European versions use the international theme. Although this adaptation of the Japanese theme is longer than the last game's, it's still considerably shorter than the international version. This continues to affect the Ham-Jam song based on the title music, still making it the longest song by a large margin in the US and EU releases.

The Japanese animation for this Ham-Chat was edited for European and US, changing the Japanese sprite and adding two more sprites at the end, due to the fact that the original pun didn't work on other languages. The Japanese Ham-Chat for "Fussfuss" ("しんパイン") is a pun between "しんぱい" ("to worry") and "パイン" ("pine").

Wait-Q received the same edits to its animation in the international versions as it did in Hamtaro: Ham-Hams Unite!.

Likewise, the sneezing animation for Hamtast was changed to a thumbs-up for the international versions, as it was in the previous game.

In the Japanese version, Hamtaro can use Go-P on the fireplaces on the second floor of Boo Manor. The option was removed in the international versions.