The fourth third Hamtaro adventure game where you and the other Ham-Hams have to gather the colors of the rainbow for Prince Bo's umbrella so he can create one and return to Rainbow Land. This title was originally going to be released in North America, but was ultimately cancelled. 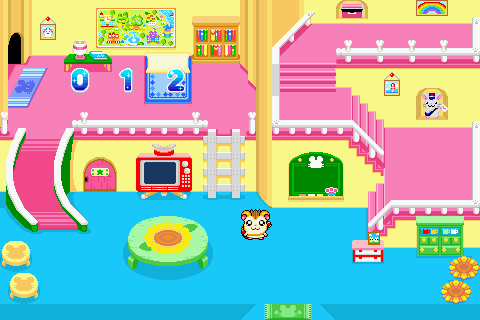 There is a debug room, that looks like the Clubhouse, which can be accessed with the room selection cheat code with the ID 0001 (see Unused Rooms). 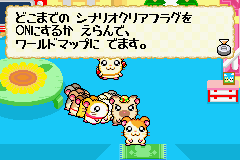 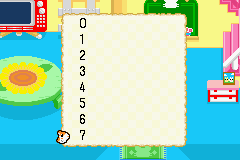 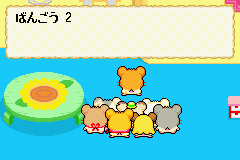 This game still has some functional debug menus.

It is possible to trigger any of those by setting the correct value for the next event pointer at the IWRAM's address 04:5A28 (EU) or 04:59C8 (JP), for example with the cheat code 03005A28:XXXXXXXX (EU) or 030059C8:XXXXXXXX (JP). While interacting with almost any object (e.g. talking to a Ham-Ham or picking up sunflower seeds), setting this event pointer then advancing the dialogue allows you to access the event.

An inaccessible though active debug menu can be opened by talking to that shop hamster in Rainbow Land. One way to access it is to go in front of the "0" in the Debug Room and use the room selection cheat code with the ID 012F. In this menu you can choose: 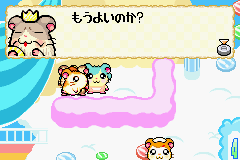 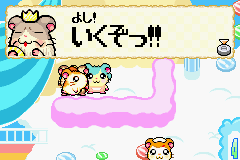 Some rooms hide a green elderly Ham-Ham at the origin (top-left), which normally can't be accessible.

The first menu lets you:

The options in the team-changing menu are as follows:

Note that clearing the team won't alter the first Ham-Ham you control.

There is a debug menu for testing the events that occur in Sparkle Coast. This lets you activate some story event flags and change your party between 4 formations that are used during the storyline of this area. There are 2 pages in this menu, but oddly no connection between them, as you can't go to the second page in the first one. The dialogue parts uses Snoozer as the speaking character.

Note that all "Yep-P" and "No-P" will be replaced according to your language set.

You can trigger the second page by setting the next event pointer to 08208B5B (EU) or 081B8F3B (JP). Option 7 will do the same as option 7 in the first page. Option 8 has no text in the menu. For some reason, option 10 incorrectly uses the dialogue of option 9 at the end, saying that you switched to a 4 members team while you actually switched to a 3 members team.

Another Sparkle Coast debug dialogue. This time it just lets you warp to the beginning of Sparkle Coast's chapter. Bijou is the speaking character.

Due to some error, the second text after your choice will appear without clearing the dialogue box, making it unreadable.

All these rooms can be accessed using a cheat code:

5 Clover Elementary maps linked to each other are not used in the final game. There isn't any interaction in these maps, but the loading zones and links to other maps are defined, and even links with used maps. 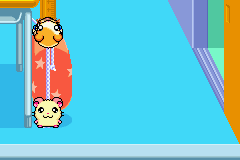 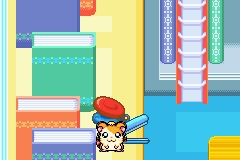 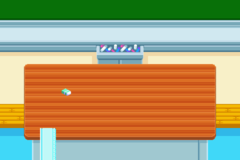 There are 5 items never used in the final game. Each one has name, images and description in the Japanese version. In the European version, they lost their names, showing only the images and the Japanese description. All of them can be seen in the item menu with the cheat code 02001E78:000101XX, where XX is the item ID.

Additionally, there is an unused dialogue (in both versions) involving the "Ham-Ham Ring" and another item, the "Lucky Gold Card" (see Unused Events for more information).

There was an event where you would have exchanged with an Ham-Ham NPC the Lucky Gold Card for the Ham-Ham Ring. However, the Ham-Ham Ring wasn't used in the final, and this event goes unused.

Saying "Yep-P" in this dialogue gives you the Ham-Ham Ring and takes out the Lucky Gold Card of your inventory if you have it.

There is an event in the first chapter where you find Boss searching for the Orange on a tree and request his help. While this was used, another version of this event still is in the game, which is longer than the final one. The early version also doesn't use the orange color for the word "オレンジ".

You can trigger this event by setting the next event pointer to 08217486 (EU) or 081C7A36 (JP), but it will not always work because characters are moving during the event.

These backgrounds are also considered as rooms, so they can be accessed using the room selection cheat code. 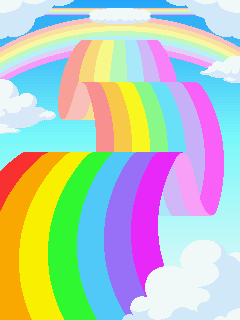 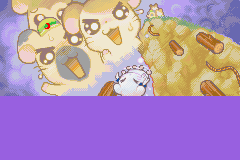 This background looks like other backgrounds used for end chapter cutscenes. However, there is no information or text that can be related to this background.

As with past titles, both versions of the game have different title screens, each using their region's respective title and subtitle. The European version adds a literal rainbow between the two not present in the original and changes the color of the suns on the sides of the subtitle from red to yellow/orange. The European subtitle also has the colors of the rainbow in a sort of backwards order, with an extra light blue added in for most of the "w" and a repeat of red at the beginning instead of the straightforward Japanese version.

Both versions of this game use the same character table. However, alphanumeric characters were redrawn for the European version (including some that were never used in the Japanese version), as well as the buttons. Most of the symbols on the extended table were slightly moved up, and some characters were added.