Harvest Moon: Friends of Mineral Town is the fourth game in the series, based on Back To Nature. This would be when all of the gameplay elements started to settle for later entries.

Always a good idea to keep one around!

This item was in Harvest Moon: Back To Nature and was used in the very first event with Elli; however, it has no use in Friends of Mineral Town, and cannot be obtained. Surprisingly, it is worth 800 affection points when given to a girl.

Queen of the Night

Technically not unused because it is seen in one event in the game; however, it is normally impossible to see it in your inventory. When hacked into your inventory, it even has its own description, and is also worth 800 affection points when given to a girl.

This book from the Library contains every plant ever.

Seen briefly during Mary's purple heart event, but is also impossible to see in your inventory normally. It is also worth 800 affection points when given to a girl.

There is a hidden event script (0x080E) which shows a debug menu that allows the player to edit affection towards villagers and play an unused tutorial scene. It can be accessed with the following CodeBreaker code and using the calendar inside the player's house. 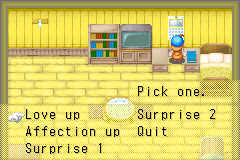 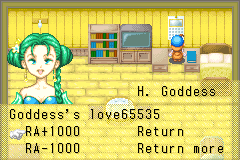 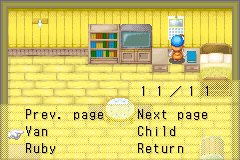 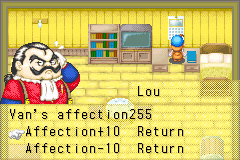 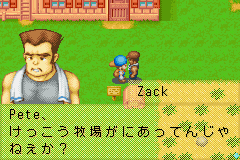 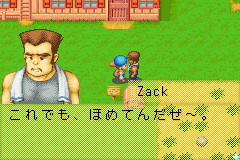 This text can be seen after talking to Zack a few times when he picks up your shipment. 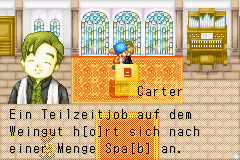 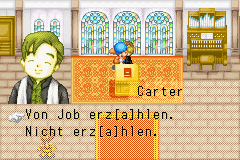 This text - missing some German umlauts, represented here by the letters in square brackets - can be seen when you offer Carter the Winery Job. The [b] is also wrong, as ß should be represented as ss when not available and isn't related to b. Translated it reads:

In the Japanese version there is an event that is triggered by checking your TV at exactly 4:44. This time is considered bad luck in Japan because the number 4 has the same sound as the word "death" (shi). If you attempt to trigger the event in the US version it will open and close the dialog box endlessly. The Japanese text is still in the US version of the game, but untranslated.

The text shown there was supposed to be a riddle, where the player should read the text wall not from the left to the right, starting from the first line like in a English, but rather read it like in traditional Japanese (i.e. vertically starting from the right column). The various riddles would tell the player how to uncurse equipment.

With the use of a hex editor you can find some text strings.

This string is scattered throughout the ROM.

In pirated versions of the game you may at times get this message.

This game allows you to connect to the GameCube game Harvest Moon: A Wonderful Life for a few bonuses. In order to access it, you have to throw an item into the Harvest Goddess Pond. In the US version of the game, the Harvest Goddess will ask you if you want to stop communication. However, that is not correct because selecting No will exit out of the screen. In the European version, this was fixed by changing the word "stop" to "start".