Hashire Hebereke is one of the many, many games Sunsoft has created of the titular penguin,

This time, they are going to RUN, RUN, RUN!! 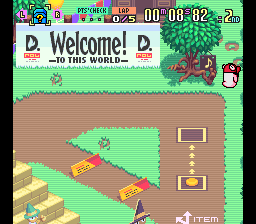 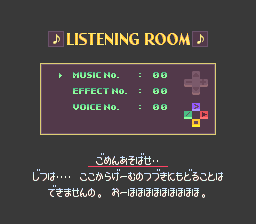 Start the game, then immediately walk to the upper right corner of the first level, which will reveal a door leading to the "Listening Room" (sound test).
(Due to the style of Japanese used, it may be implied that the text below is spoken by the character O-chan.)

(Sound Test ID: 16)
A track possibly meant for Booboodori's stage (which in the final game... shares its theme with Utsuzin).

(Sound Test ID: 13)
A track meant to play when winning.

(Sound Test ID: 14)
A track meant to play when being on the last lap (respectively).

While the game is always cropped to a 1:1 aspect ratio, we can un-crop it thanks to some emulation hacks (thus allowing us to see the level in full).

Unfortunately, when the shake effect appears, some glitchy parts may appear (which is why the developers cropped the game's screen), as seen below. 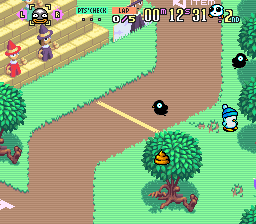 When the game detects it is played on a European/Australian console, the game disables every button input, thus making it unplayable. The same method is found in O-Chan no Oekaki Logic.