Project Mirai DX is basically an updated re-release of Mirai 2 with 35% new content including one new song, new PVs for songs that didn't have a 3D PV, and a few other odds and ends. It's also the first and only Mirai game to be released outside of Japan. 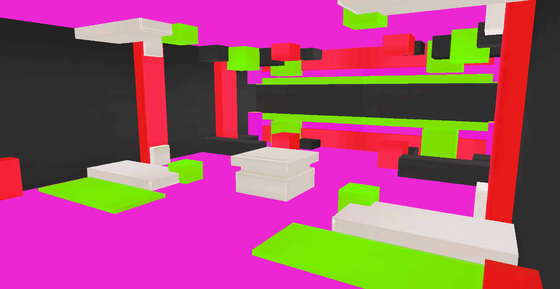 obj_dance12 is a dance studio version of ARIFURETA SEKAI SEIFUKU (Common World Domination). Oddly, this used to be for Change Me in Mirai 2, then it was changed and still ended up going unused. 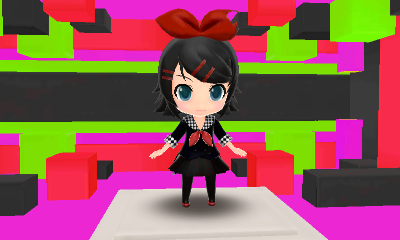 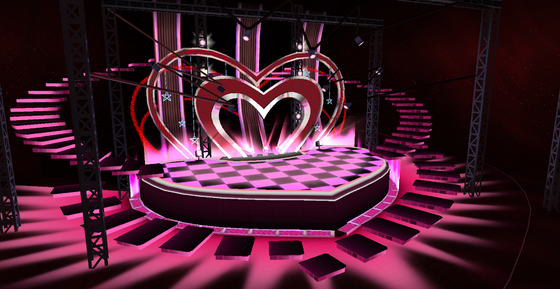 obj_dance13 is a heart-shaped stage. This stage resembles the one seen in Change Me from the Project Diva series, suggesting the song may have been planned to be in Mirai 2/DX. 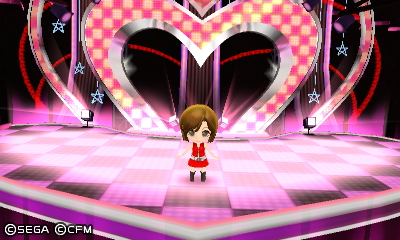 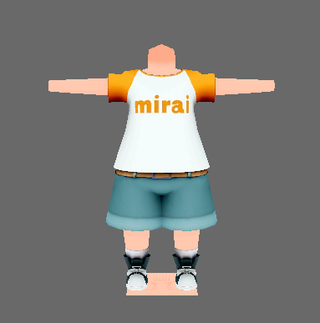 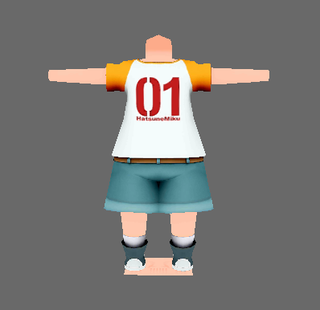 This module was used in Mirai 1 by Miis in AR Mode, but since Miis aren't used anymore, this goes unused. It has its own ID too to make it load for a PV. 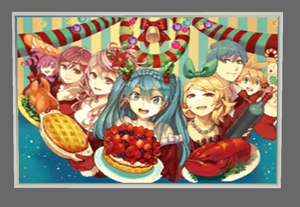 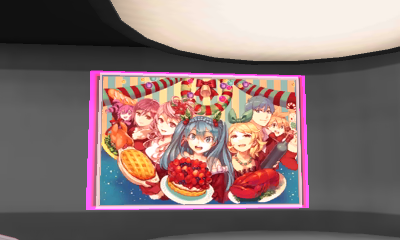 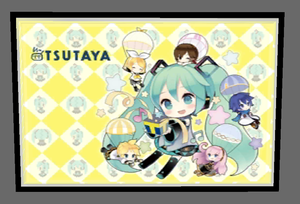 A poster with Miku, Rin, Len, Luka, Meiko, and Kaito. This one also has its own name in the code, which is known as "TSUTAYA Poster". 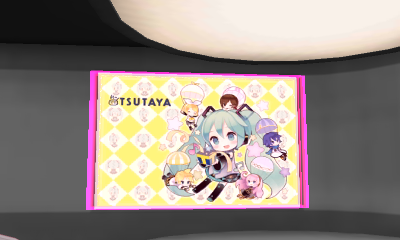 In "nwbin", Gumi has leek models in her hand models as well. Everyone else uses them for the leek room object, and Miku, Rin, and Len also use it at Watashi no jikan. This is another sign that Gumi was planned to be playable in "My Room".

The Yumeyume animated PV in the options still has animation data for the blue line for the notes. However if restored, it is buggy and goes off-screen.

It's possible to add a 6th extra song to a song (the max is 5 normally at SING&SMILE and 1925), but the icon for the character ends up at the top left corner of the bottom screen, showing only about half of the icon, and cannot be selected.

NOTE: These only load with the unused code remix_parent. Otherwise, these would load their default modules.

(These work normally without remix_parent). These seem to be Luka's, Kaito's, Meiko's, and Gumi's normal default module IDs, but only Miku, Rin, and Len use theirs, so these go unused.

This is a song sung by Chika, which isn't present in the game. It's also in Mirai 2's code, but it's not present there either. This is odd since the song was released on February 14, 2015 and Mirai 2 was released before that, so it seems rather just a coincidence.

This is a song sung by Meiko, which was probably planned at one point. This song also would have made its first appearance in the games.

This one is most likely Phantom Thief F. This is a song sung by ten Vocaloids known as Miku, Rin, Len, Luka, Meiko, Kaito, Gumi, IA, Gackpo, and Mayu. It seems like the IA and Mayu would have appeared as guest stars then at one point. This one also would have been its first appearance in the games.

Debug-related stuff. This kind of sounds like that Sega knew people would eventually look into the game's files, or hack the game.

The way these are named, it seems like that edit mode, like in DIVA F/F 2nd, may have been planned at one point during development, but got cut and replaced with Dance Studio. ChoreoEditor however is unknown what its purpose was. "%02d" is just a placeholder for each PV number/internal name.

This is a type of code for pv_db.txt/pv_db_en.txt, but it's never used for any of the songs. It has been tested, and depending on the Costume ID that a PV is set to (this includes other modules like Snow Miku), it'll always load that module even if it's not the module it's set to in the PV settings. This also oddly works with the unused module (ID 99). But this is bugged if it's set to a PV with an extra song, because it'll only load one of them (normally the first extra song).

More unused coding for pv_db.txt/pv_db_en.txt. They have been tested, and they appear to do nothing. However, these were used in the Project DIVA Dreamy Theater games, except disp2d.set_name was also used in F and F 2nd. disp2d.set_name made certain graphics appear depending on the number it's set to in the DIVA series, like the logos, but since Mirai just loads them without using it, it goes unused.

This seems to be a removed directory called "pvlog". Or it appears in the files when a PV is played, but never able to be viewed. The interim_log.txt is unknown, but the pv%03d%s.txt (%03d%s = pv number) could be for the PV that is being played.

A strange list of fruits. Fruits aren't even mentioned in the game at all. This was probably a test for the message bar for Gumi in the Lobby.

In the "pv" directory, there are files for a Super Hard Melancholic ("pv_012_3ds_extreme.dsc" (button mode) and "pv_012_t_extreme.dsc" (tap mode)), indicating that there was a planned Super Hard for the song Melancholic. However, it has the same data as Hard.

pv_029_edit.dsc and pv_030_edit.dsc have unused facial animations of 2 songs. 029 is Golden Holy Rotting into the Frost and Snow's mouth and eye animations (Miku has no hands for this), and 030 is StargazeR's (only has 1 hand). These files didn't exist in Mirai 1, as 029 and 030 are Mirai 1 PV numbers, so they were probably planned again for Mirai 2/DX.

It's possible to add another song to the list on the PV select if one is added in pv_db.txt/pv_db_en.txt (like pv077, which doesn't have a song). This can be done by just using code like how the existing songs use theirs. If this is done, a new song can be selected and unlocked, but with bugged graphics, no song select preview, no name, etc. However, it wouldn't be possible to make a full song with this because some files won't work with an unused PV number like stages. The only files that would work is dsc files and graphic files (aet_pvXXX.bin and spr_ae_pvXXX.bin).

The Matryoshka PV has the animations seen in AR unseen normally in-game. However, the PV animations use "mot_pv013.bin", and the AR version uses "mot_pv013_ar", thus making the PV ones unseen.

In the "nwbin" directory, there's a dummy file called "scn_sceneenvironment_dummy.bin", which is a type of file used for lighting. However, the file is empty.

In the "aet" / "aet_en" directory, there are two empty PuyoPuyo animation files named "aet_puyogum.bin" and "aet_puyogac.bin", and two empty texture files named "spr_ae_puyogum.bin" and "spr_ae_puyogac.bin". This suggests that Gumi and Gackpo may have been planned to be playable for the PuyoPuyo minigame, and this would have been Gackpo's first appearance in the entire series.

In aet/aet_en, there seems to be a total of 80 PV files for graphics and graphic animations (aet_pv0XX.bin and spr_ae_pv0XX.bin), but 29 of them are empty. Whether they were meant to be planned songs is unknown, except pv017, pv029, pv034, pv035, pv036, pv037, and pv047 because they have a removed song shown in other files. However, pv034-pv037 is only in Mirai 1 because they had unused animations and were completely removed from Mirai DX.

There's some files for the English translations in the Japanese version, all completely finished, even though the international version was released much later. This includes the pv_db_en.txt, mic translations, and a few other files. Not all of them were presented here, yet.

This does make sense, however, because the US and EUR versions were originally planned for release 3 days after the JP version before they were delayed. The pv_db_en.txt's lyrics also had some differences. In this one, some only had a few small differences, like some capital letters were changed to lowercase, some space was added to some of the sentences and some removed space, and a couple other differences.

Various comments and some settings for PV tests. There's a specific note here about PV62 being skipped for the Korean release. More details on this can be seen below in Regional Differences.

The trial_version code actually loads a fully functional JP E3(?) demo version of the game if it's set to 1. It's set to 0 to prevent it from loading. If it's set to 2, it loads the Eshop demo. Oddly though, the song graphics used for this one is World is Mine's and Electric Love's, but they load Senbonzakura and LOL -lots of laughs-. The World is Mine one is most likely used for the Korean version. It uses the graphics from spr_ae_test.bin.

The pv_closed_version code makes only the songs the player has from the start of the game if set to 1. Finder (DSLR Remix - re:edit), Yumeyume, 1/6, Romeo and Cinderella, and Electric Love. If it's set to 2, it mostly does the same thing, but also skips the opening at the title screen. This may have been used for some kiosk demo, or used for testing.

Oddly, Leia's unused coding from Mirai 1 made a small change in Mirai 2/DX. The script format for the .dsc files were changed to DX's. Mirai 1 used "0x11040100" and Mirai 2/DX uses "0x12080100". This may have been just a mistake while changing the script formats, or they planned to add Leia again.

Some of this coding is used for the Yumeyume anime PV in the options, like the "song_file_name" and "disp2d" codes, but most of the others are unused, like the "sabi.start_time" and "sabi.play_time" (used for the start of when a song is played for the preview and how long it plays), all of the difficulty codes (for dscs and each difficulty. It even still uses the original level of each difficulty from Mirai 1, and tap mode dscs were oddly added), the bpm, the "song_name" and "song_name_reading" (usually used for the song names on music player), the "disp_no", the "beat_start", and the songinfo stuff.

The JP pv_db.txt also has a TODO for changing the disp_no so it doesn't appear on the song select, that was removed from pv_db_en.txt.

In pv_field.txt, there's unused field coding for yet another removed song. However, it is unknown what song it was going to be. The best guess however, is World's End Umbrella from DIVA F, since it has one stage at the very beginning, and mostly the rest is an animated PV.

Oddly, dsc files can have any type of name and will load in-game if set properly in pv_db.txt/pv_db_en.txt (Ex: hatsunemiku.dsc). They can also work in different directories as well, even the ones that don't exist. It's unknown why they can do this, but it may just have been a mistake.

If the edit dsc (pv_001_edit.dsc) is loaded at a difficulty by changing it in pv_db.txt/pv_db_en.txt, at one point towards the end, the blue line for the notes will draw a heart and 5 music notes, which normally never happens through normal gameplay.

The 20th track Senbonzakura was removed in the Korean version alongside its module. This change is also reflected to the demo version, in which the track is replaced with The World is Mine instead.