Hearthstone: Heroes of Warcraft is Blizzard's free-to-play online collectable card game based on the Warcraft universe. It is one of the most popular VCGs out there, even if it has little to no sense of bala- HEY EVERYONE! GET IN HERE!!!

For each hero, there exists an unused "Good Game" emote. Designer Ben Brode said that "Good Game" lines were recorded but ended up not being used because of the potential for being rude. It is interesting to note that even heroes added later, such as the purchasable Medivh and Magni, have these lines as well, possibly for consistency and just in case they end up being used in future development.

On April 24, 2016, the "Sorry" emote was replaced with the "Wow" emote and removed from the selectable emotes accordingly. However, it is technically possible to hear the "Sorry" emote by playing a particular card (which is not legal in every gameplay format) and hoping to randomly blurt out the hero's "Sorry" line. Much like "Good Game", heroes introduced after this change also had "Sorry" emotes recorded.

Also, for whatever reason, Garrosh has an alternate Sorry emote that differs from his standard one. It is unknown if this was ever used.

The Player vs AI Monster Hunt mode added heroes exclusive to this format. They too exhibit hidden "Sorry" emotes, but since deck-building in this mode is restricted to picking card bundles every round, it is much more difficult to hear these emotes in-game. In addition, Mirror Greetings exist for these heroes. In PvP matches where two players wind up using the same hero character (Jaina vs. Jaina, Thrall vs. Thrall, etc.), one player's "Greetings" emote changes to reflect the situation. Since the Monster Hunt heroes cannot be selected outside the mode, nor face one another within it, these emotes go unused. 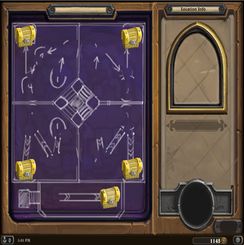 Here we have a file used in prototyping Naxxramas.