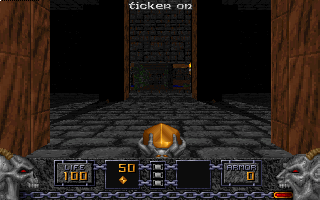 The frame rate ticker from Doom is still available, but instead of being activated with a launch parameter, it can be activated at any time during gameplay with the TICKER cheat code. It prints a line of 20 white or black pixels in the upper left corner - divide 35 by the number of white pixels to determine the current frame rate. 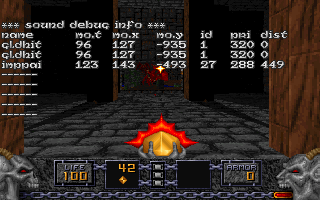 The NOISE cheat code activates a sound debug info text overlay, which shows the file name, ID, distance, and other info for the sound being played in each channel.

Launch the game with the -ravpic parameter to enable taking PCX screenshots with the F1 key, instead of it cycling through the ordering, controls, and credits screens.

This was the first release of the game.

v1.0 shareware actually has an image of SKY1 on the F_SKY1 flat used to open sectors to the sky. All future versions, including v1.0 registered, replace it with a four byte file. This has no noticeable impact in-game, since the flat can only be seen in editors.

This was the first update, as v1.1 was never released officially. It fixed a "green screen" startup crash, a problem with restoring save games from SETUP.EXE, and "few sniggling little bugs too esoteric to mention".

The WALL56 patch used by the SAINT1 texture was made more detailed in this version.

The Firemace weapon is unique in that it only has a 75% chance of appearing in a level, and only one Firemace can appear at a time even if multiple spawns for it are present.

In v1.0, any extra spawns would be replaced with different enemies depending on the episode: Disciples of D'Sparil in City of the Damned, Weredragons in Hell's Maw, and Ophidians in The Dome of D'Sparil. Additionally, due to a bug, Shadowsphere artifacts replaced them in the secret E4M1 deathmatch level if it is loaded in single player. Note that the Firemace never officially appears in City of the Damned, so the Disciple replacements could only be seen in custom levels. That is no longer the case in this version.

Shadow of the Serpent Riders

Much like The Ultimate Doom, when this game saw a retail release two additional nine level episodes were added: The Ossuary and The Stagnant Demesne. Two more hidden deathmatch levels have been added in the E6M1 and E6M2 slots, and the one that was originally in E4M1 was moved to E6M3 due to the inclusion of a real fourth episode. On the startup screen, this is called v1.3.

The title screen was updated to use the same Tome of Power featured on the box art surrounded by flames, instead of the original artwork of Corvus fighting Undead Warriors.

Eric C. Biessman and Tim Moore were added to the level design credits. The rest of the text was shifted slightly to make room for them and the drop shadows were removed. The background was also touched up, though somehow a few areas became slightly corrupted (mostly behind Shane Gurno and Brian Raffel's names). 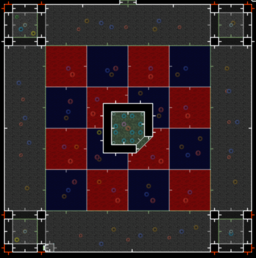