So three RPG classes walk into a bar... They don't order a drink, though, because they're spending too much time trying to find more friggin' switches!! 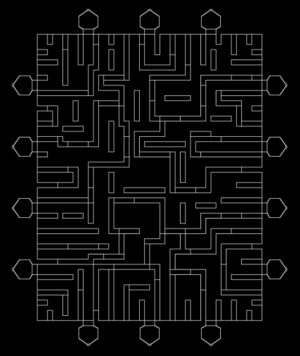 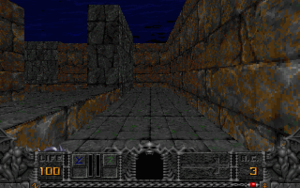 The original v1.0 release of the game contains an unused map: launch the game with the parameter -warp 41 or type visit41 while playing to be warped to Maze. This map is a maze completely devoid of enemies. It was removed in v1.1.

When you start the level, a set of maze walls will raise to the ceiling (specifically, sectors tagged from 20 through 108 inclusive). After a short delay, between 45-65 randomly selected walls will lower to the ground (the same wall may be selected twice). Periodically, one of eight doorways on the edge of the map will open to reveal a switch that may be pulled to change which maze walls are active. While there's a total of 14 of these alcoves, a script bug only allows the first eight to be activated.

Additionally, this map has unused script 04, which randomizes the map layout without the lightning flash. The switches instead trigger script 01.

The MAPINFO lump, where levels are defined, also has 19 leftover definitions from development under a "Miscellaneous maps" heading. Maze is the only one of these maps that still exists in the WAD. Some of them are almost certainly earlier versions of maps that made it to the final game.

Likely an early version of MAP13: Shadow Wood, given the name.

Likely a demo version of MAP08: Darkmere, given the name. These maps and Sacred Grove all share the same foggy sky setup.

Only thing of interest here is that it uses the same sky definition as the maps in cluster 3.

The only miscellaneous definition that actually has a corresponding map – see above.

The only thing that can really be said is that it was Eric C. Beissman's map.

Likely an early version of MAP10: Wastelands. It uses SKY4 with a speed of 50 instead of SKY1 with 80, however.

Likely an early version of MAP09: Caves of Circe. Like The Badlands, it uses SKY4 with a speed of 50 instead of SKY1 with 80.

Given its placement, this might be an early version of MAP11: Sacred Grove. It's using the same sky setup as the two maps above, though. The final map is foggy.

Almost certainly an early version of MAP12: Hypostyle. Again, it has a different sky setup, only using SKY4 without the mountains used in the final version.

Ben Gokey, co-founder of Raven Software and lead programmer during this game's development.

The Deathkings of the Dark Citadel expansion pack also has one unused map definition, and of course the map itself no longer exists.

Unused projectiles for a variant of the Bloodscourge weapon. Two frames of the projectile are offset poorly, and shift to the left while animating. These projectiles are fully implemented in the source, are defined to spiral like Bishop projectiles, have a base damage of 6, and do up to an additional 64 splash damage in a 192 map unit radius.

A golden version of Heretic's Morph Ovum item is present in the IWAD. Though the final Porkalator item looks completely different, the projectiles fired are still the small eggs from Heretic, but also recolored gold.

An arrangement of "Simon", the track used in Guardian of Ice. This is only assigned to Nada in Hexen, one of the unused map definitions, but does get used in Deathkings for the Market Place hub.

This is assigned to the early definition for Shadow Wood, but "Crypt" is used in the final map.

After getting hit by a Porkalator projectile (either from within the tower or by bouncing it off a Slaughtaur), you can squeeze in the gap to the east of the castle moat, and proceed to sequence break.

Version 1.1 removed this shortcut by reducing the gap height to 8, down from 24.

Linedef 555 was a projectile hit trigger in v1.0 and Nintendo 64 versions, and changed to a use trigger in v1.1. This affects how the player exits the item-filled room south of the starting area once Porkelator wears off. 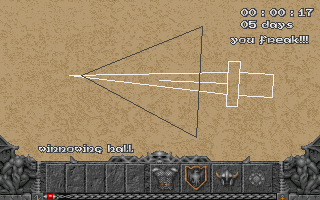 The map displays a timer showing how long you played. If the timer exceeds five days, the game will print "YOU FREAK!!!".