The following appears to have been intended as Dream Nail dialogue for the Hollow Knight:

The following appears to have been intended as Dream Nail dialogue for the Pure Vessel, who was added in the Godmaster DLC.

The following appears to have been intended to be a conversation between the three Dreamers, and appears to be a lengthened version of the Dreamers’ dialogue after Hornet’s first battle and the Resting Grounds.

These lines of dialogue are unused lines for Elderbug.

These lines of dialogue were intended to be spoken by Godseeker, an NPC added with the Godmaster DLC.

Originally, Gorb was to be named Aladar, after their Kickstarter backer Aladar Apponyi. Gorb has several lines of dialogue still under this name. These lines are used in the French translation, as the translation was made while dialogue was still being finalized.

This line of dialogue was intended to be used after the Knight acquires the King’s Brand, but is not used.

These lines of dialogue were intended to be used by Herrah.

This line of dialogue appears to have been intended to be used when Hornet is holding the Hollow Knight down in its boss fight.

This line of dialogue was intended for the Last Stag.

This line of dialogue appears to have been intended to be used after dying in a Trial and interacting with Little Fool.

These lines of dialogue were intended to be spoken by Lurien.

This line of dialogue was likely going to be used when using the Dream Nail on Mister Mushroom without the charm Spore Shroom equipped. In the final game, Mister Mushroom’s thoughts can be read even without this charm.

These lines of dialogue were intended to be spoken by Moss Prophet, likely as an extension or early version of her sermon about the light. They appear to be in an early stage of finalization.

This is an early version of one of the verses of Myla’s song.

This appears to be an early version of the dialogue that appears when using the Dream Nail on the Pale King’s corpse in the White Palace. This dialogue was removed in the Hidden Dreams update.

This is an early version of the dialogue that appears when trying to sell a relic to Lemm, but you have no relics.

This line of dialogue was intended to be used when using the Dream Nail on the Royal Retainers; they use three other lines of dialogue in the final release.

These lines of dialogue were intended to have been used for Salubra after the Knight gets enough charms to be able to buy a charm notch from her.

These lines of dialogue appear to have been intended to appear when using the Dream Nail on a Shrumal Ogre without Spore Shroom equipped.

These lines of dialogue appear to have been intended to appear when using the Dream Nail on a Shrumal Warrior without Spore Shroom equipped.

This line of dialogue was intended to be spoken by the White Lady, and was removed in the Hidden Dreams update.

It is unknown what characters were intended to have spoken these lines.

There is an early version of the lore tablet at the entrance to the Abyss in the game’s files.

There is an early version of the text that appears when interacting with the fountain in the Ancient Basin.

This is an unused lore tablet that would have appeared in the City of Tears. In the final game, some Royal Retainer corpses in the Ancient Basin use some of this dialogue.

Some inspect text for an unknown corpse. It could have been intended for the dead Vessel in Greenpath.

The game's opening sequence displays the first four lines of the poem, but the rest can be found in the game's files.

The full poem is as follows:

This likely would have either appeared when inspecting the Eternal Ordeal statue of Zote. Added in the Godmaster DLC.

There is an unused version of Menderbug’s Hunter’s Journal entry in the files. Note the incomplete sentence.

Originally, Menderbug was going to drop an “Odd Key” upon his death, which could be used to open his house. in the final game, his house automatically unlocks after his death.

A lore tablet that would have appeared in the Soul Sanctum. In the final game, there are only Records Aba and Cenda. In the files, it is referred to as BELA_MAGE_COMP_02.

Knight Statue in Hall of Gods

This dialogue originally appeared when interacting with the statue of the Void Entity in the Hall of Gods after beating all bosses on Radiant difficulty, added in the Godmaster DLC. In patch 1.4.2.8, this dialogue was changed to “Void given focus.”

An early version of the Hollow Knight’s memorial inspect text, under the name of “RUINS_FOUNTAIN”.

Before version 1.0.2.9, Xero’s grave had a different epitaph.

Notes from the developers regarding lore, characters, development, and editing of the game's text.

There are several unused sprites in the game’s files.

A cut dragonfly enemy that can be found in the files. It is not used in the final game, but will be used in Hollow Knight: Silksong.

A lifeseed that would have had the ability to fly.

Originally, the sewer entrance in the City of Tears was going to require a unique key; in the final game, only a Simple Key is needed.

A strange blue lantern, known only as the “witch’s eye” in the files.

Originally, Menderbug was going to drop a key upon death, which could be used to unlock his house In the final game, his house is automatically unlocked upon his death.

An early version of the Elegant Key can be found in the files, under the name “Mysterious Key”. In the Weird and Wonderful reveal trailer, Sly can be seen selling this key for 600 Geo (compared to 800 Geo in the final game.)

An unused item. Its purpose is unknown.

An unused map, under the name of the “Treasure Map” in the game’s files.

The only remnant of an early snail village located in the Resting Grounds, seen in the Weird and Wonderful World trailer. 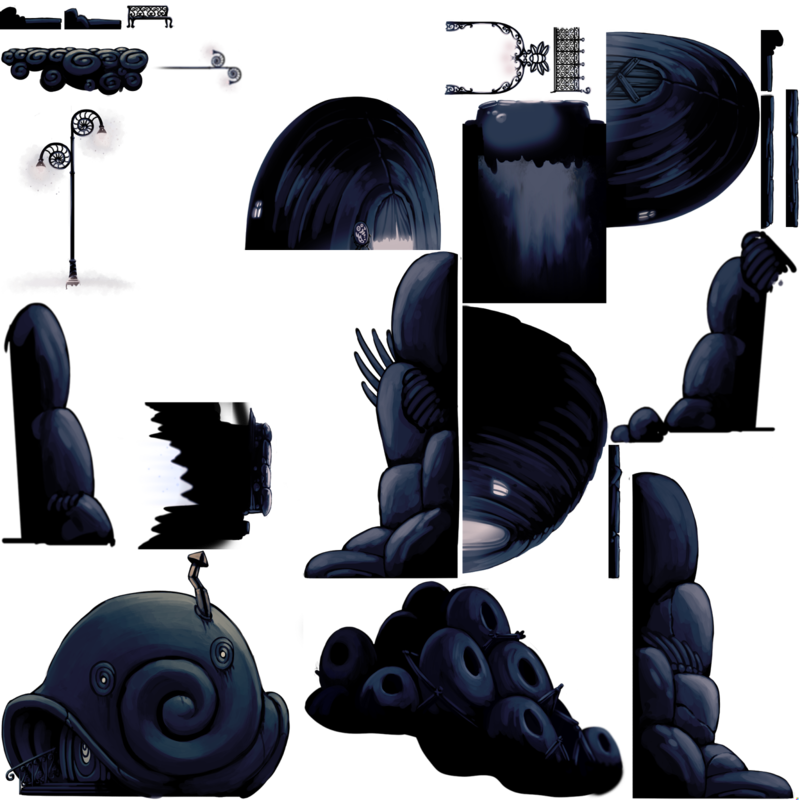 An unused bench that consists of Vessels. Likely would have been located in the Abyss. 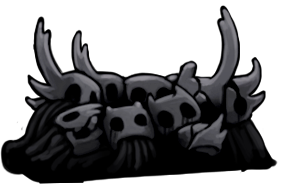 Unused dream particles that would have likely appeared in the Voidheart dream.

Some low-resolution sprites of a Belfly, with a red stomach.

Originally, Soul Vessels would have only consisted of two Vessel Fragments. Sly’s description for his second Vessel Fragment is a remnant of this idea. 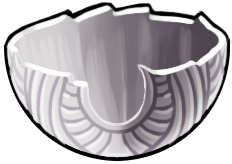 An unused variant of Shade Soul can be found in the files, which resembles Abyss Shriek.

Before the game’s release, a fully-grown, infected Weaver named the Spider Mage was showcased on Twitter. Its Hunter’s Journal entry images can still be found in the files.

Each Grimmkin type has an unused variant of their Nightmare Pursuit attack sprite in the files. They were added in The Grimm Troupe update and were removed in the Lifeblood update.

If Zone’s statue in the Eternal Ordeal entrance room is moved using third-party programs, cut Hall of Gods difficulty selectors, along with a switch that appears to have been intended for switching bosses between dream variants, can be found. These were added with the Godmaster update.

The top of Elderbug’s head could be found as a separate sprite in the files, prior to the Lifeblood update. This is a remnant of Dream Diving, an early ability that was cut from the game.

A cut menu style that would have been received for beating all bosses on Radiant mode in the Hall of Gods can be found in the files. This was added in the Godmaster update. 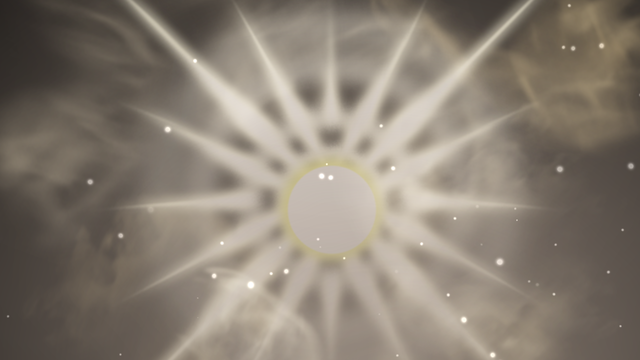 Sprites for a dead Garpede can be found in the game’s files, despite the fact that they can not be killed. 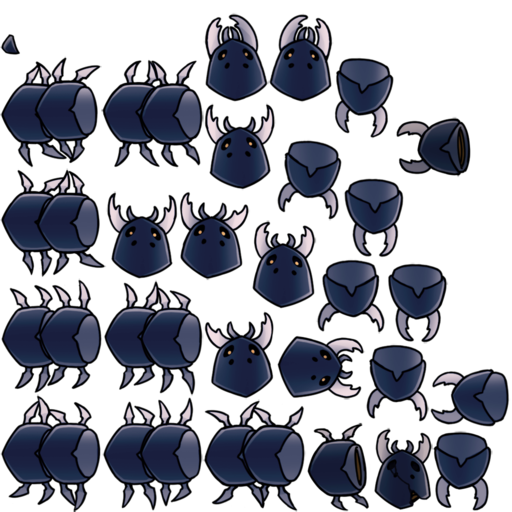 A sleeping animation for the Last Stag can be found in the initial release version of the game, though it was removed in later versions. This animation can also be found in the files of the beta. This sprite was edited to become a Stag corpse in the Stag Nest.

A cut sprite in the files suggests that the Amblooms were originally able to jump. This could also be a frame for an extended hurt animation. 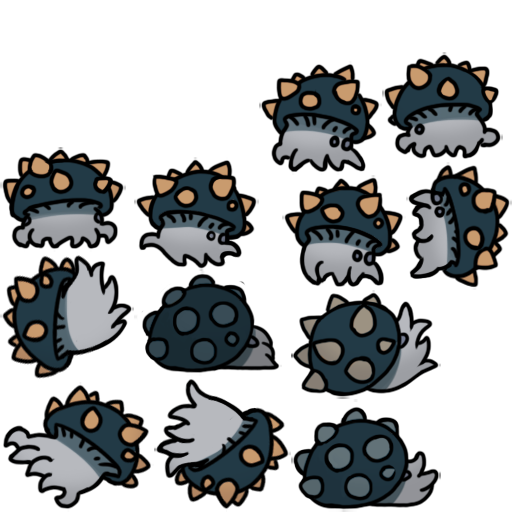 Some concept art for the Crystal Crawler can be found in its sprite sheet. 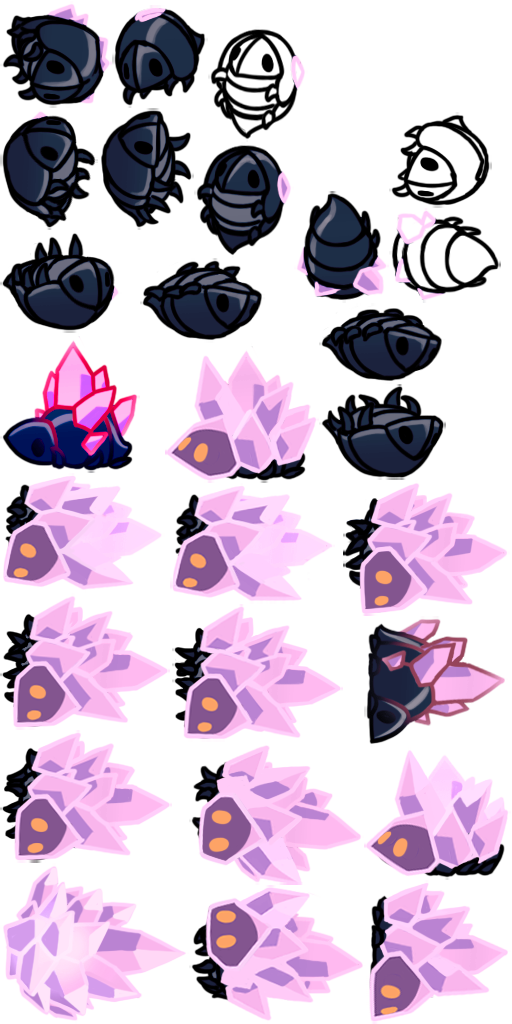 The Dreamers have unused images for Hunter’s Journal entries.

An unused sprite for the Shrumelings can be found in the files. 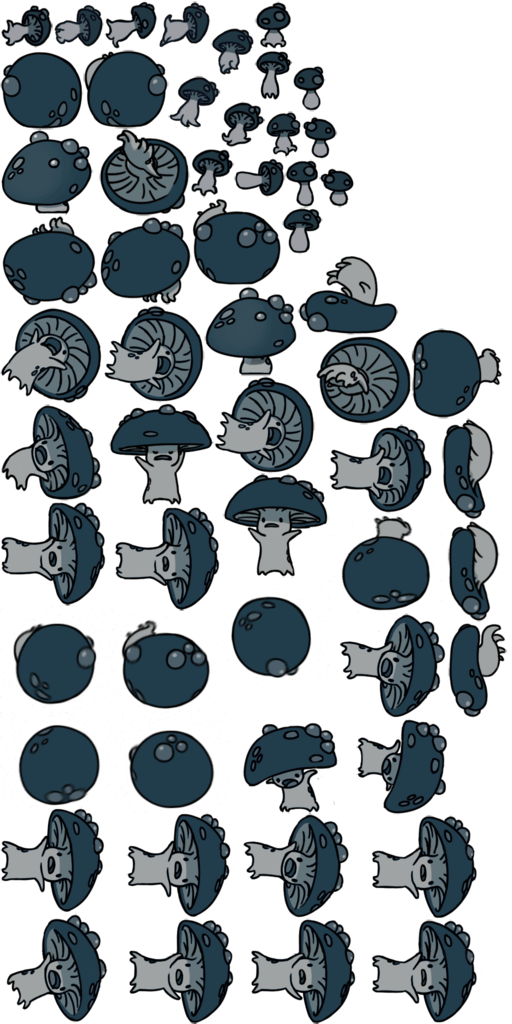 In the Weird and Wonderful World reveal trailer, Myla can be seen in her own room with different dialogue. The sprites for this room can still be found in the files. 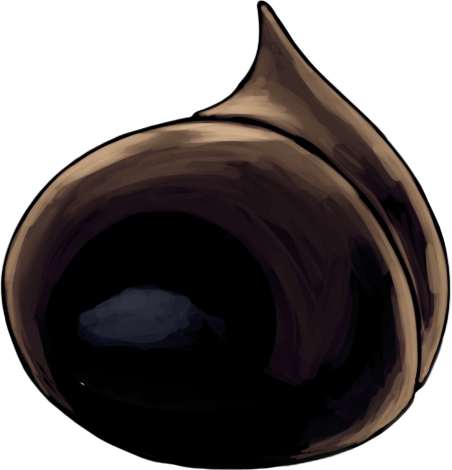 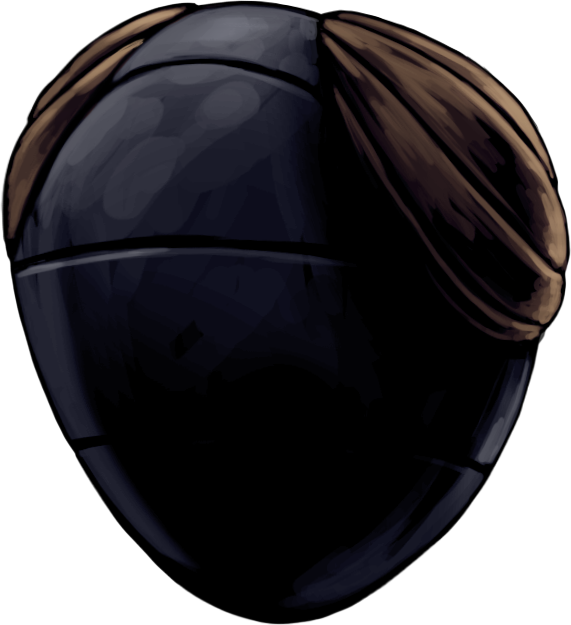 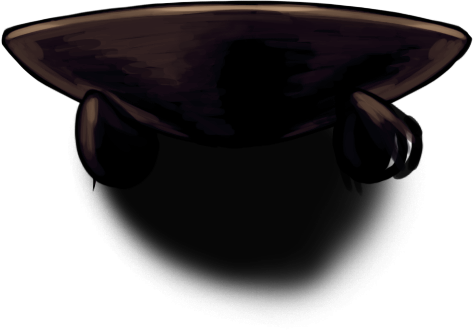 There are several audio files that can be found in the game’s files, but were never used in the release version of the game.

This sound, referred to as “hammering” in the files, could possibly have been an early version of the Nailsmith’s hammering.

The Seer has an unused dialogue sound for when she is in her Dream form.

Five unused tuning sounds were added with the release of the Godmaster DLC. They appear to have been intended to be made as examples for what the final sound should sound like.

Before the Hidden Dreams update, there were several unused rooms that could be found in the files.

A room identical to the room where the first Dreamer can be defeated.

A cut NPC, seemingly an early prototype for the Dreamers. Wears a mask like Monomon's, has a shape and cloak similar to Lurien's, and stands on the ground rather than floating. Originally, the Dreamers all shared this design.

An unused room in the Ancient Basin, to the right of the Palace Grounds. It features a unique bench on the right, and spools of thread. As the room is travelled through to the left, the room becomes less detailed. If the room is exited on the left side, the Knight is brought to where the Hidden Station is now (the Hidden Station also has spools on the right side of the room). The assets for this room are referred to as assets for Hornet’s room in the files. 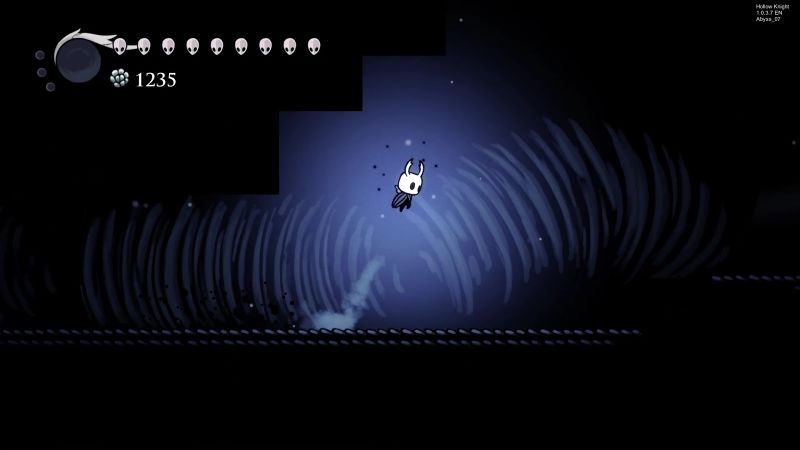 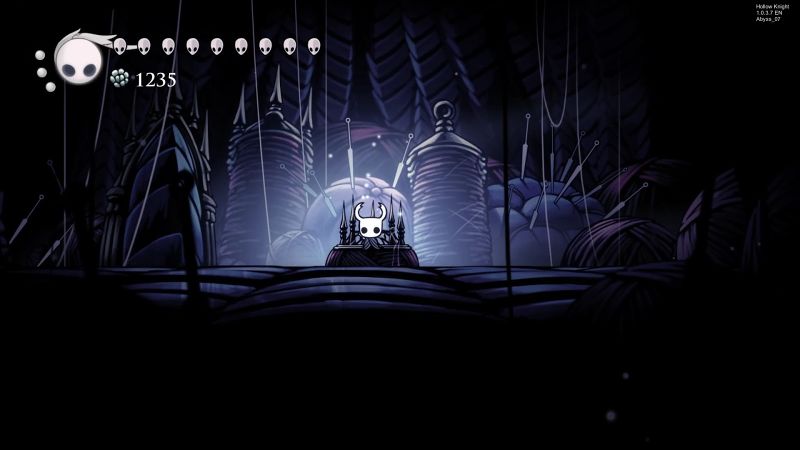 A larger version of the secret area with moth statues in the Spirit’s Glade, where the Shrine of Believers can be found. 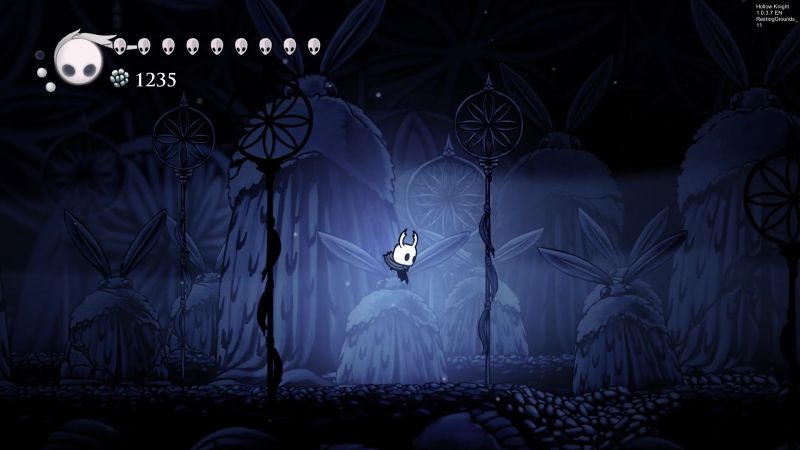 An early version of Unn’s hideout in Greenpath. Based off the room’s layout, the room was likely going to be swam (an unused ability) through. 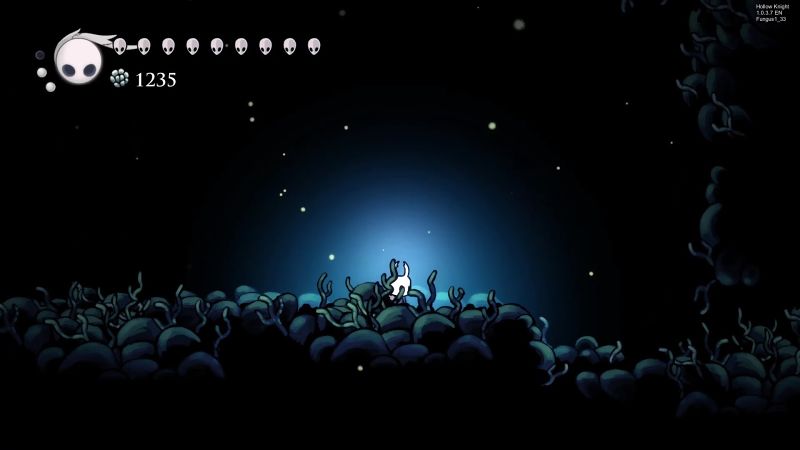 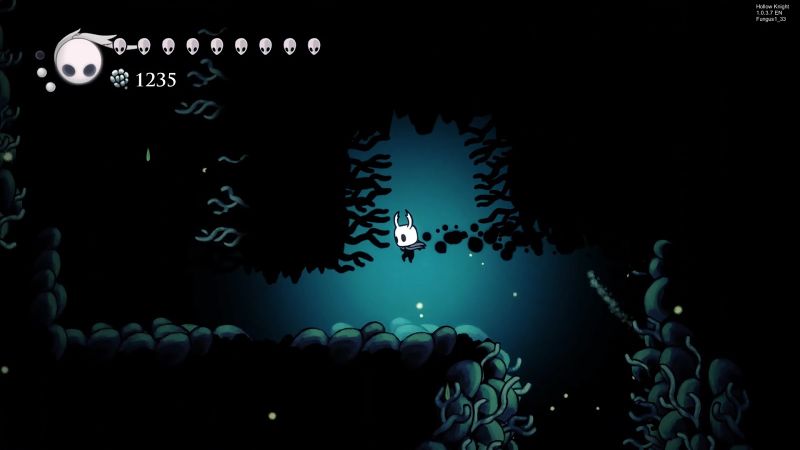 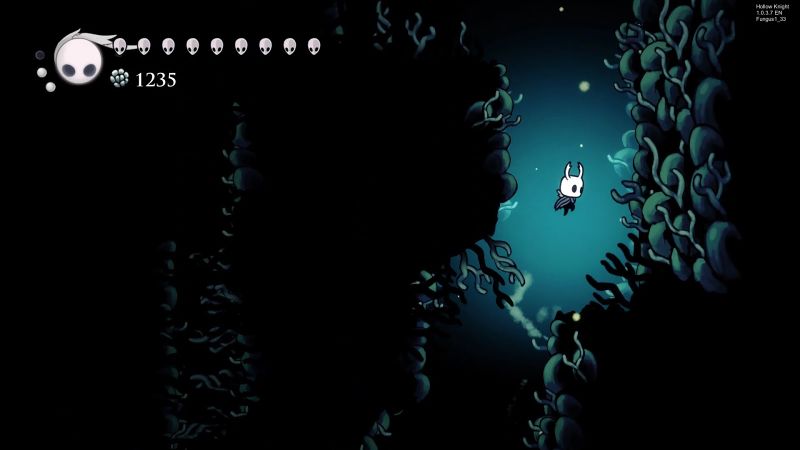 An untextured room which was likely an unused part of the Teacher’s Archives, though it is apparently a Fungal Wastes room.

An unknown room intended for the Fungal Wastes that was likely going to be swam through. 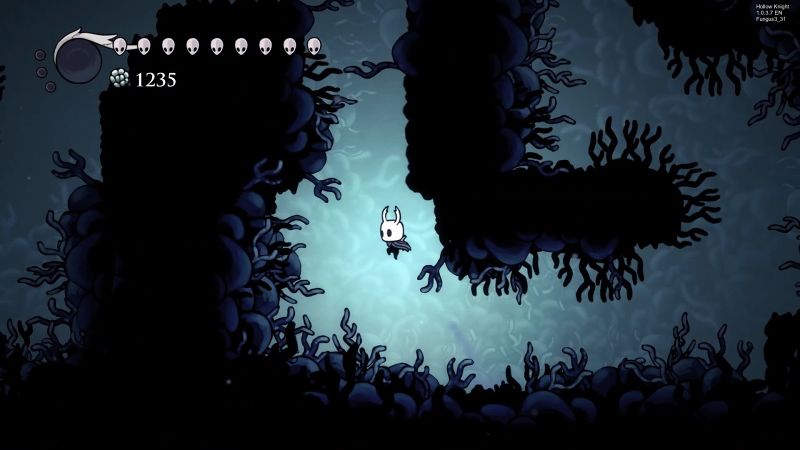 An untextured room intended for the Fungal Wastes with an unknown purpose. 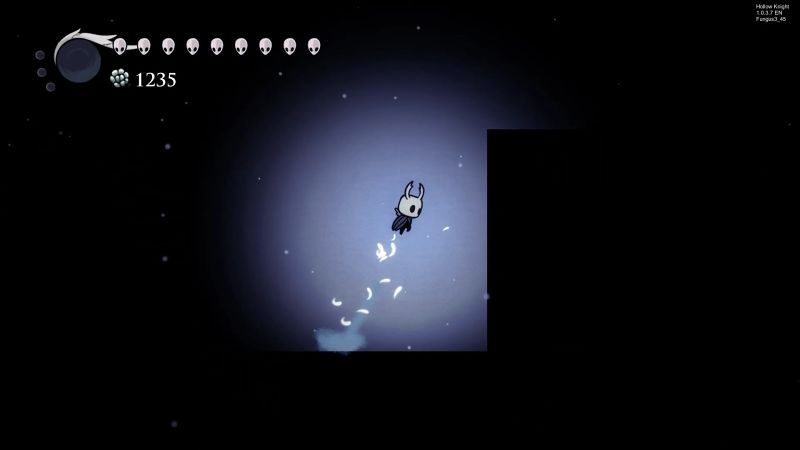 Another untextured room intended for the Fungal Wastes with an unknown purpose. It has a broken spawn point. 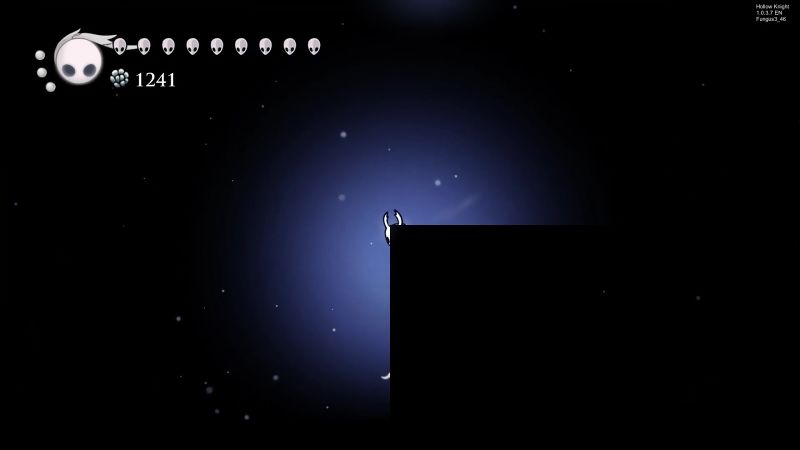 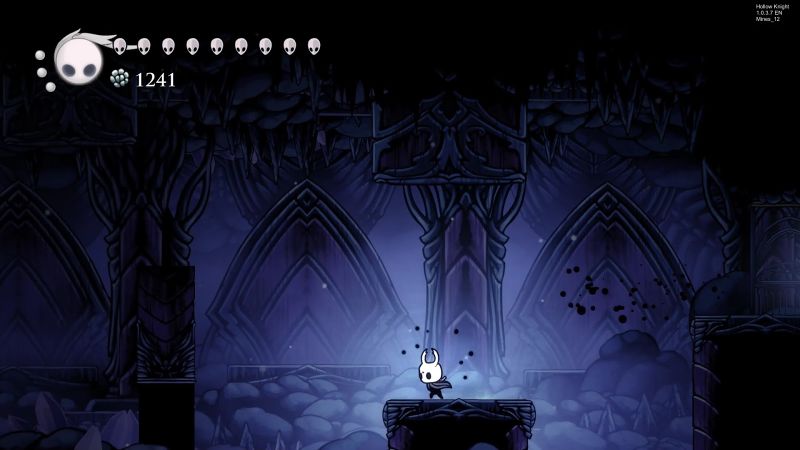 Another unused Crystal Peaks room. There is a breakable wall in this room, but it has no hitbox and can be walked through. There are also a large empty area that may have been a boss arena, and a Crystal Dash section with a nonfunctional Geo rock. 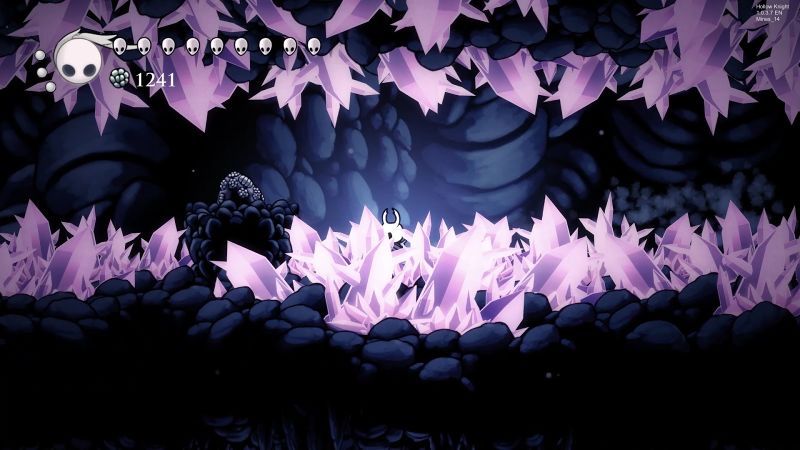 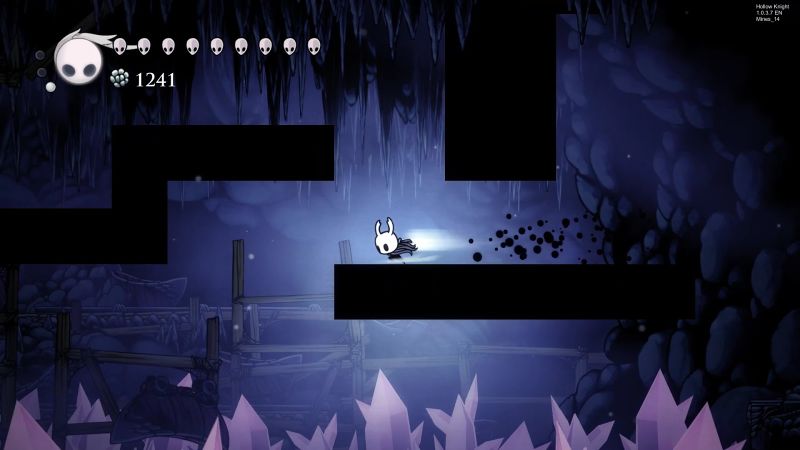 Another blank, untextured room. It is unknown where this room would have appeared.

In the background of the room where the Glowing Womb charm can be found, there is a sprite referred to in the game’s files as deepnest_blur_hive. This matches up with an early map of the game, where the Hive was located in Deepnest.

Goals have an HP value of 91, though they are not able to be damaged in-game.