Home Alone is an NES game based on the film of the same name.

The player takes the role of Kevin McCallister, and must survive getting caught by the Wet Bandits for 20 minutes. Yes, 20 real minutes. Kevin can lay various traps to hinder Harry and Marv, as well as hide in certain places. However, you only get one life, so if you are caught, it's a game over, and the game starts from the beginning. 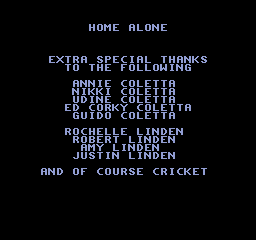 This code can be entered with either controller, and can also be done in Bethesda's other NES games (Wayne Gretzky Hockey and Where's Waldo?) to bring up a similar screen.

Present at 0x06FC is the string RAND. This is a reference to the programmer, Randy Linden. The string checks whether the credits screen has been displayed or not upon reset.

The game contains the graphics from the title screen of Where's Waldo.

Getting caught by one of the burglars will bring up this screen. Originally, this was art of Kevin doing his famous scream pose. Revision 1 replaced him with a puff of smoke that has "oh no!" in it (make of this what you will), and also moved the picture frames down a bit for some reason.