The game's source code was later discovered on an old hard drive and released.

What looks like a pizza box, possibly an earlier version of the HUD icon for the pizza item, which restores health. 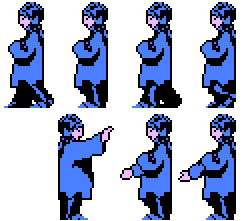 Stored with the graphics for the second level are sprites for the Pigeon Lady, who makes her only appearance during the final boss. In the Game Boy version she appears in the sewer area with these exact same frames as a boss of sorts, so she was probably supposed to appear there.

The very first cutscene features Mr. Hector siccing the hotel staff on Kevin. Normally he makes this weird grin while speaking, but disabling the background layer shows a different graphic which, intentionally or not, merges with the background to create said grin. 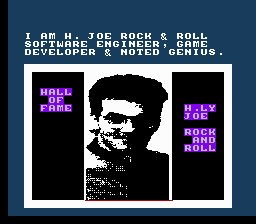 Go to the 16th floor of the hotel, grab the invincibility item from the first room, and enter the second room while still invincible. Make sure you have no ammo for the dart gun, and press Up on the closet door to see a secret message from "H.ly Joe":

Pressing Start during the message will put you back at the beginning of Level 1, but with all the items you had collected up to that point. If you let the message finish, however, you'll be warped to the next stage.

"Holy Joe" refers to Joe Moses (listed as Joseph A. Moses in the credits), the game's programmer. 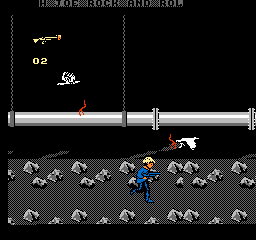 In the sewer stage, there is a line of text "H JOE ROCK AND ROL" written on the top line of the screen, which can't be seen on NTSC televisions but can be seen in the European version. It's worth noting that at the end of the sewer level, there are the "HJ" initials to the right of the ladder. 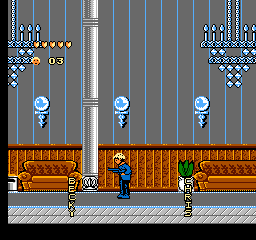 In Level 1, after the Gift Shop, there is a lamp in the middle between the jumping couch (4th) and the couch to the left of it (3rd). Jump above it using the jumping couch to reveal two special items with names "BECKY" and "CHRIS". Each gives you 1,000 points. Similar items can be found in other games by the same developer.

Track #1 and Track #5 of the NSF file are not heard anywhere in the game, which is strange because both are a remix of the movie's theme.

There are a few variants of the title screen music that go unused. According to the source code, they are just "components", and therefore aren't used.

A faster version of the final level's music is also present, with percussion, but goes unused. The source code lists the song as m_dmgchase. The song is used during the final boss segment in the Game Boy version, and seeing that the song title has DMG in it, this is most likely referring to the Game Boy version. In the NES version, the normal boss music plays during the final battle instead.