From The Cutting Room Floor
(Redirected from Honoo no Doukyuuji: Dodge Danpei (Genesis))
Jump to navigation Jump to search

Before using any patch code, use 356:60 (Gens/GS) to bypass the checksum check. 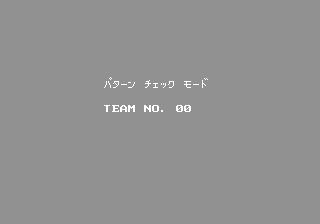 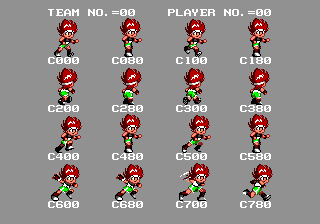 This is a sprite viewer for player sprites. Apply patch code 450:0018 (Gens/GS), then reset the game. On the first screen, use Up and Down to select a team to view and hit Start to choose. On the second screen: 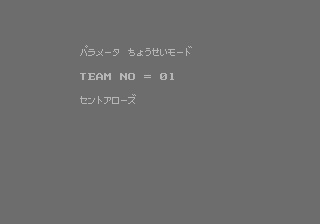 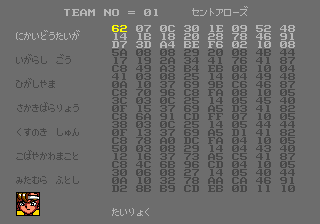 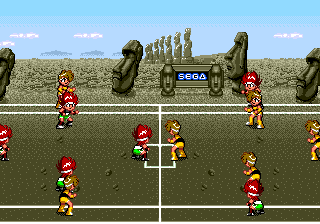 This allows you to adjust team/player statistics. Apply patch code 450:0030 (Gens/GS), then reset the game. On the first screen, use Up and Down to select a team to view and hit Start to choose. On the second screen, use the D-Pad to navigate and B or C to change a value. Each group of three rows represents a character; what each cell represents is unknown. Hitting Start has Danpei's team ("Tamagawashou"? たまがわしょう) go against the selected team on the Easter Island court (apparently with both teams consisting entirely of their captain in every position; see picture), but once the players assemble, the game locks up.

The other buttons appear to do nothing? 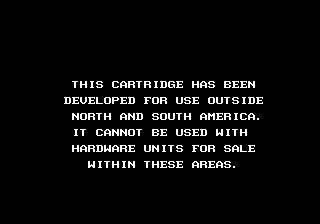 At $474 is an unused routine that sets the initial game mode to the Sega screen on a Japanese Mega Drive and a (unique to this game) error message on other region systems. The routine will only work properly if it replaces the instruction at $44E, which sets the initial game mode. The following patch codes (all at once, and compatible with all patch code systems) will re-enable the routine:

Applying patch code 450:0058 (Gens/GS) and resetting will start you up on the region error screen without checking the region. Interestingly(?), the region lockout text does not mention the game not working in Europe.