Hot Wheels Stunt Track Driver is an FMV game in which Mattel's ever-popular Hot Wheels cars apparently become sentient and do ridiculous backflips of their own accord on tracks constructed by the richest and most overprivileged child in the world, who somehow managed to run a bunch of those flimsy plastic strips through his whole house and an entire sandcastle. It's actually pretty slick for its genre – the stunts are fun, though the physics are occasionally wonky. It also has an excellent rock soundtrack by a Mr. Bill King, whose only other known compositions are this game's sequel and Michelle Kwan Figure Skating. Something of a fall from grace, that.

There are two duplicate sets of car textures. One uses a standard "car[x].bmp" numbering system, while the other has actual names for the cars. Only the first set is used in-game, leaving these files (and car names) unused.

Drawn between textures in BLASTER.BMP.

There are also several textures that are not used at all, most of them apparently leftovers of earlier designs.

Three different versions of the texture for Car 4, Hw500. These are arranged chronologically according to the file timestamps, with the far right being the final version. The artist seems to have tinkered with the colors and added an extra decal so that the Hot Wheels logo wouldn't be backward on one side of the car. The text directly below it was not given this treatment, though, so it shows up backward anyway.

For some reason, this car and this car only has an older, named version of its texture stuck in the \data\ folder with the numbered textures. Its design changed significantly for the final.

For some bizarre reason, Cars 7 and 8 alone have duplicate, older versions of their textures stored in PCX format alongside the regular BMPs. Both of these are dated over a month before the final versions.

These files seem to be left over from an artist's struggle to properly produce the textures for this car. 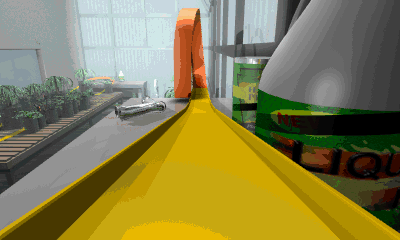 This is a still from the very start of the greenhouse level. It serves no apparent purpose.

A pink 81x81 box. It is duplicated as the sole file in the folder \data\cars\junk\. Perhaps a transparency test?

This car, numbered 0, has no corresponding file with an actual name. Its textures are unused and structured differently from any other car's, suggesting it is a leftover from early in development. It has a corresponding MMD file, and can be accessed by swapping the MMD file with the MMD file of a car accessible in the game. This car is similar in appearance to Speed Blaster.

The car is actually used at the beginning of the Stunt Track Driver demo found on the Hot Wheels World Adventure sampler CD. One more interesting bit is that halfway through the demo, the car switches to car01, Salt Flat, via an FMV transition. 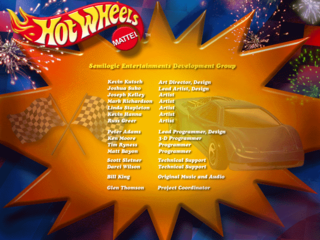 The file CREDITS.PCX contains, obviously enough, the credits, but they are never used. There is no credits sequence in the game, even after winning the tournament mode.

The game has a hidden, half-complete level. It can be accessed by completing tournament mode, going to the level select menu, and right clicking on the first letter T of the Mattel logo. This causes the music to change to an unused track (see below). At this point, starting the race will begin the secret level.

The level's FMV is clearly unfinished; the background consists only of green wireframe scenery. Its scope suggests that it was intended to be a large outdoor areas, such as a quarry. The video also does not seem completely synced to the collision model in some points, causing the car to occasionally "float" above the track. Aside from these graphical details, the level seems more or less complete and is entirely playable. It ends with the car crashing through a sign.

The level was probably scrapped because of time constraints or because it didn't fit the household theme of the other levels well enough.

This short file is located in the directory \data\cars\. When run, it copies the named textures shown under "Unused Graphics," as well as their corresponding .MMD model files, into the \data\ directory, renaming them to use a sequential numbering format. This is probably a leftover development tool to quickly prepare the graphics data.

Most notable are the three REM'd out lines at the bottom. If uncommented, they would overwrite the data for cars 10, 11, and 12 with the prototype versions of SPECIAL shown above. This might have been used to quickly compare how the different versions of the car looked in the actual game.

This file is almost identical to car.bat. Aside from having a different extension, the line

has been omitted, and the three commented-out lines below it are restored.

This file's purpose is less clear. It contains the following:

Its use is unknown.

The music used in the game is stored as .sag files, which are actually IMA-ADPCM files encoded at 22050 Hz. Two of these are unused or otherwise hidden:

This is the theme for the unused seventh level. Notably, the last minute or so consists of the music used upon winning the championship mode. Presumably, that segment was clipped out and reused after the level was cut.

A thirty-second loop of a closed hi-hat sample. This may have been used to test a new sound engine – see below.

Alongside the .sag files are a series of .sig files, one for each level. These are very different from the corresponding SAGs; they're ADPCM WAVs encoded at 11025 Hz (with slightly irregular headers). Their quality is much lower than the game's normal music, and their contents are very strange.

These files, whose names correspond to the Arcade, House, and unused levels, as well as the main menu and custom track mode, are all shortened copies of hous.sag. They have a different intro that jumps straight into the song's main riff, and they are less than half as long as the higher-quality version.

A shorter version of the Attic level's theme.

A shorter version of the Greenhouse level's theme, with some odd voluming issues.

A shorter version of the Sandbox level's theme.

A shorter version of the Bedroom level's theme, with the order of some parts slightly rearranged.

The championship victory theme, extended and without sound effects. This appears as the ending of the secret level's theme.

This is especially interesting: it's an extended, sound effect-less version of the introduction music. This piece never appears in this form in the final game.

The way the level themes are much shorter and cut off abruptly suggests that at one point, they might have been intended to loop. In the final game, each one simply plays to completion and then restarts.