hyper-girl was to be a top-down eight-directional shooter with "TripTronic" vector graphics and multiple gameplay styles. The title character would be split across three worlds into three different selves, who battle to reunite at an interdimensional nexus and retake it from Chaos.

The red world was spun off and released as battle-girl, with hyper-girl planned to follow as a sequel. However, all that reached the public was a leaked pre-battle-girl prototype, with an early version of the red levels and half of the intended blue ones.

In case there was any doubt about his inspiration, the red world's spiky, hungry archvillain is known internally as "Sinistar". battle-girl redesigned him into a giant mecha called Terminus, but some of the internal references survived.

Although there are no green levels implemented in this build, many of their planned elements exist, including mushrooms, giant amoebas, and Nature Girl's tank. 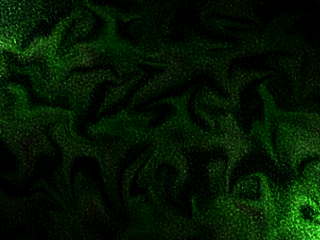 There is also one background texture meant for the green world, titled "mating deer".

Little is known about the endgame starring hyper-girl's recombined self, but she does have this inaccessible character select portrait. Too bad it's just a rough sketch from the neck down.

The only background image allocated for these levels is titled "all black", and is exactly what it sounds like.

This unused logo shows what may have been an earlier name for Ultra/United.