Being the second installment in the Neptunia series, Hyperdimension Neptunia Mk2 is the sequel to the original game; receiving assistance in its development from Keiji Inafune's own company Comcept, this game aimed to right most of the wrongs from the rather critically-panned predecessor. Fans declare this game for getting the foot through the door for the Neptunia series and essentially kickstarted its popularity into what it's well-known for today: Personified game consoles battling each other as well as evildoers, whom take on the form of piracy personified.

It later received a remake known as Hyperdimension Neptunia Re;Birth2: Sisters Generation released for the PlayStation Vita and later ported to Windows PCs via Steam.

Three unused music tracks are present in the game's files. The first two appeared on the Original Soundtrack CD (as Tracks 02 and 13 respectively), but the third was not. The original purpose for the track isn't known, either, but the instrumentation gives the feeling of comic relief.

In any case, these tracks would become used much later in Hyperdevotion Noire: Goddess Black Heart. 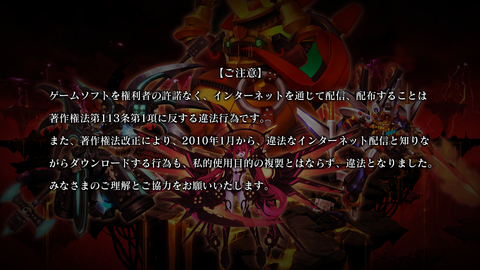 An anti-piracy message graphic exists in the game's files, located in the "protect" directory of the "SYSTEM" archive file. The file is named copy.tid and is meant to be displayed when the game detects that the game is being played on an illegal copy. Fittingly, it depicts The Four Felons, who are the antagonists of the game in the form of personified piracy. The text describes the Japanese 2010 File Sharing Law that mandates criminal sentencing for illegal file sharing and piracy of copyrighted material.

It is unknown how to trigger this image to display, however, if there is even a trigger for it at all.