Help Indy save the day by trading priceless artifacts for sticks and spark plugs in Indiana Jones and his Desktop Adventures. Uses the same engine as Star Wars: Yoda Stories.

These debug dialog resources exist within the program's executable file.

The Windows preview version does not contain most of the scenario scripts, and some character sprites are blank.

DESKTOP.DAW is encoded in little-endian format, even on the Macintosh. The file can be swapped between platforms with no issues.

The Macintosh version of the game was released slightly later than the Windows version, and contains a few changes in its resource archive.

Most of these refer to control modifications required for the Mac.

A slight change was made to the way you proceed in the Van Loon scenario.

If you drop bananas onto Indy's sprite (not the health meter) while standing to the left of the fire in the wooden hut with room ID 0x80, he will say, "Ugh. Too much fruit!" 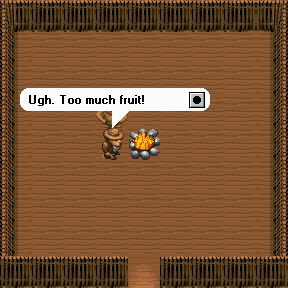 On Windows, a sound will also play that sounds like breaking wind:

The sound effect is hidden in DESKADV.EXE as resource 102 (all the normal sounds are stored in the program's directory). It is not present in the Macintosh version.