Indiana Jones and the Fate of Atlantis

After booting up the game, enter shinymetal on the keyboard. Then, press Ctrl, Shift and D together. At any time Indiana Jones is on the screen, press one of the following key combinations:

There are a few places that are unused in the final game, with most of them located in the cave of Knossos.

The room to the right of Sophia Hapgood's office isn't accessible in the game, and is only used for a cutscene. This part of Sophia's office was probably meant to be fully playable with Sophia entering the other room. It has also been discovered that this room also contains a clever nod to Maniac Mansion by labeling the fern in the corner as "Chuck".

The door between the two rooms is called "exit".

The desk drawer is named "clippings".

The dressing screen that uses Sophia in the scene is called "changing screen". It is also possible to open and close.

The cave of Knossos contains four unused rooms. One contains an older version of the large minotaur statue that Indy must use his whip on. Some doors lead to used rooms in the cave, while others are nonfunctional.

The two doors do not work.

The left door and the middle door: 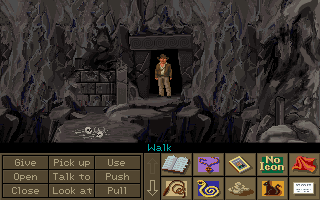 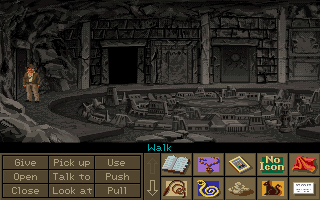 The middle door leads to a room, but the right door does not work. 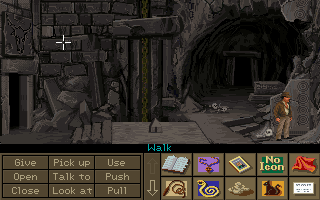 There are two unused items that can be activated using a hex editor.

It's an expensive topcoat.

This coat can be seen in Indy's office at the beginning of the game, and belongs to Klaus Kerner. However, it can't be picked up, and has no inventory icon.

It appears to be full of torpedo tube parts.

Klaus Kerner's submarine can't be entered without hacks. However, an exclusive item is available inside, which can't be found in the other two game modes when inside the submarine. It doesn't seem to do anything, though. 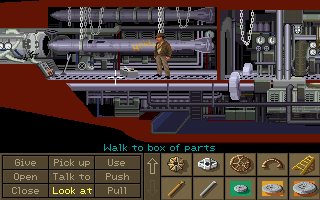 There are a number of icons for unused items. They can be seen by modifying a backup of the game with a hex editor.

This mask does not resemble the mask that was used, so it's probably an earlier version of it.

Marcus only appears at the beginning of the game and does not move much during his appearance. However, there are some unused animations of Marcus pondering, with front and side views.

In this room, the entrance to the cave starts out intact, with a wooden door frame. Later in the game, Klaus Kerner causes the door to collapse and Indy has to dig his way out with a shovel.

In the actual game, the room reverts to its original appearance. However, there are graphics for a third room state, which looks much more like the aftermath of a reopened entrance, with extra debris and the broken pieces of the frame, but it was never used. 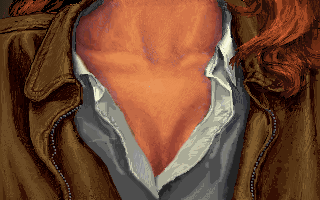 Throughout the game, except at the very end, Sophia is always wearing her necklace. However, when Sophia removes it, the game never shows a closeup of her neck. With a hex editor, it is possible to look at Sophia's chest without the necklace.

The world map has two destinations that aren't used in the game. In an older version, Indy would travel to Cadiz and Leningrad to learn more about the mystery of the City of Atlantis. These two cities would later appear in the comic book where Indy and Sophia meet Marcus at Leningrad and recover the Hermocrates, where afterwards Brody goes to Cadiz to recover one of the disks that would power the God-Machine. These two destinations can be seen on the map, using a hex editor on a save file. 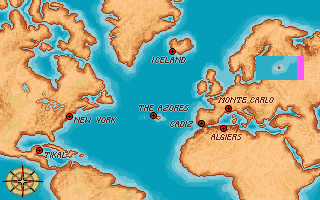 This game has a lot of unused text. Some of these scenes can be re-enabled by using a hex editor.

Marcus only appears at the beginning of the game, in the scene where Klaus Kerner steals the statue from Indy's office. Upon returning to the office after the scene, no characters are present. However, in earlier versions of the game, Marcus would still be waiting in the office, with more dialogue: 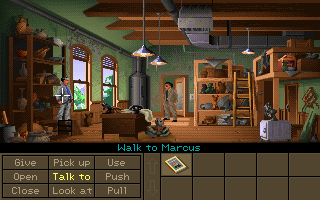 4) Marcus : Miss Hapgood may be in real danger!

2) Indy : Maybe I forgot something.

4) Marcus : Miss Hapgood may be in real danger!

Upon returning to Marcus :

Other unused items and text exist within Indy's office, such as Kerner's coat (mentioned above). 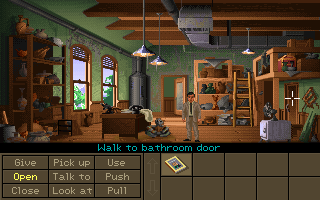 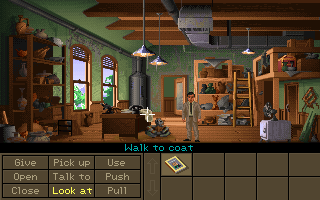 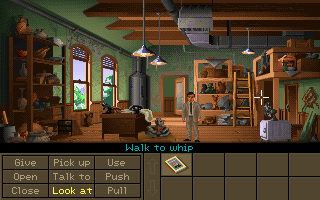 In this room, during the "Action" mode, there are unused actions for the small double doors. 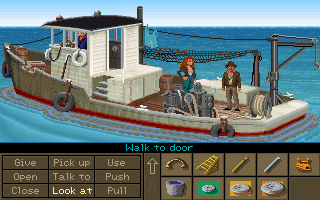 Text : Open : It's a convenient place to store things. 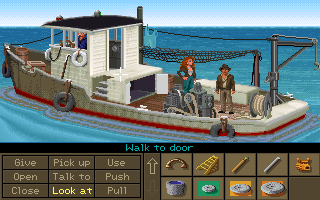 Towards the God Machine

In the third part of the City of Atlantis, the game obscures the verbs and text at the bottom of the screen. One of the locations viewed from above has two unused destination descriptions, one in all-caps with an exclamation point.

Texts : "tunnel back to hall" and "THE GOD MACHINE!" 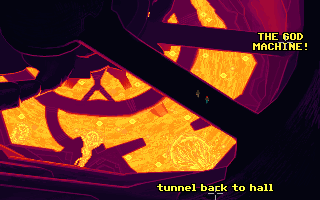 Text Not Used in Algiers

In one of the files belonging to the part of Algiers, it is possible to find a strange piece of unused text with a hex editor.

Events in the Submarine

Unused texts are in the right part of the submarine. These texts mention upcoming events in this part of the game.

A) Indy's costume going back to normal.

B) Indy getting shot out a torpedo tube.

and C) Kerner coming in and announcing to Sophia that Indy's dead. (because of those charred clothes, doncha know.)"

Some names can be seen by hovering the cursor over a game character; others are not visible. This is true of Marcus and Klaus Kerner. They are ranked third and fourth characters behind Indy and Sophia.

Versions 1.5 and 1.5t of the Mac application contain two special resource types that do not appear in versions 1.2 or earlier.

The other message is from Brad, and is formatted for reading in ResEdit's hex editor:

In the 1992 floppy version, when Klaus Kerner makes a telephone call after ransacking Sophia's office, he says:

Herr Bauer? Good news! Cable Dr. Ubermann in Berlin... inform him that I have the "samples" we spoke of.

In the 1993 CD version with voice-overs, this is replaced with voiced dialogue recycled from a later conversation Kerner has with Ubermann in the German research laboratory:

However, the on-screen text replaces Ubermann's name and has Kerner call someone named Fritz (possibly referring to the Nazi that helped Kerner escape from Barnett College, who may or may not be the guard later killed by a giant robot statue in the Atlantean prison):

The most common Macintosh talkie CD version, made for devices with 68k processors, changes the on-screen text in this scene to match the voiced lines. A later, much rarer Macintosh CD version optimized for PowerPC Macs was a fresh port of the PC CD, and so reverts to the "Fritz" on-screen text.

In the PC talkie CD, on the Wits Path when Indy finds Ubermann's telegram at the Algerian dig site, its text is read aloud in Ubermann's voice. Later, when Indy tries to warn Alain Trottier about the Nazis' plot to kidnap him, Indy reads the telegram aloud himself, though its text is still in Ubermann's blue dialog color.

The 68k Macintosh CD has Indy's voice read the telegram out loud in both instances, but leaves the blue text color unchanged. The later PowerPC Mac CD version matches the PC CD instead.

The lava-crossing puzzle in the Atlantean inner maze is programmed differently in the floppy & CD versions. The CD optimized the code so the animation would load faster, and also made it easier for the player to find a way across.

When Kerner is transformed into a goat-like creature by the God Machine, the floppy & CD versions use different palettes for one part of the animation. The floppy version is consistent with the palette in the rest of the sequence; the CD version makes Kerner's boots look flesh-colored, and changes his goat horns from silvery to golden in color.

Once Ubermann dies in the finale, the two Nazi guards in the back of the God Machine room fall into chasms as the floor breaks apart. In the floppy version, their death screams are transcribed in dialogue; in the CD, they die silently, without dialogue in text or voice.

In certain German releases of the game, the swastika seen in Klaus Kerner's passport was removed. There is conflicting information regarding the versions which are censored, or if any non-German releases are affected.

Although German criminal law outlaws the use of symbols of unconstitutional organisations such as swastikas, uses that promote art are exempted from criminal prosecution. The removal of the swastika in Fate of Atlantis and earlier extensive changes to graphics and text in the predecessor Indiana Jones and the Last Crusade: The Graphic Adventure are interesting in that they predate the 1994 and 1998 German court rulings regarding Wolfenstein 3D. These court rulings are often seen as the root of a quasi ban of all swastikas in German video game releases that lasted until August 2018. Prior removals of swastikas such as the one in Fate of Atlantis can be seen as an attempt at self-censorship to avoid legal quarrels as a consequence of the above-mentioned law, but also to prevent the game from being indexed for the purpose of youth protection or seized as part of a criminal investigation, both measures of which equate to a sales ban in Germany (also putting a nail in the coffin of the proposed sequel Indiana Jones and the Iron Phoenix that revolved heavily around Nazi ideology and imagery).