Indiana Jones and the Last Crusade is a Taito action game based on the movie starring Harrison Ford. Absolutely not to be confused with the game of the same name published by Ubi Soft two years later, which itself is based on the computer game. This game features different gameplay mechanics such as action stages, a top-down driving level, and even a frustrating castle maze and sliding puzzle. You can also choose which levels to go to. 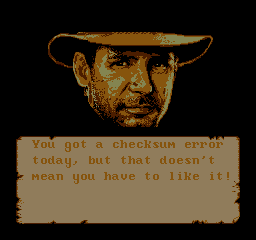 There is a subroutine that checks to ensure the game's code integrity. Each iteration, the program calculates the checksum and compares it with a previously saved one. If the CRC check fails, then the program repairs some variables, such as level number. It seems this integrity check is for some kind of protection from cheating or other user modification of memory. But, there is a message displayed for when the CRC fails. You can see it with this Game Genie code: ZKVPENUY. Just start a new game, and the CRC error message will appear instead of the first message screen. The game then goes to the ending sequence.

The Game Genie code GEEAGOOZ enables some additional camera features in the Brunwald Castle level (when saving your father). With this code camera behavior is changed: it will move the same direction as how the D-Pad is pressed - up, down, left, or right. In the final release, there is only automatic "from left to right" camera movements.