Two spaceships fire lasers at each other and innocent aliens get caught in the crossfire. Who's the real Intruder, huh???

There are two chunks of source code in the main CPU. The first is at 0x0028:

There are three sets in MAME: spcewarl (Space War), spclaser (Space Laser), and intruder (...Intruder). spclaser and intruder are meant for upright arcade cabinets, and spcewarl is for a cocktail table.

There's evidence of a cocktail table version of Space Laser, though as of this writing that set has yet to be dumped. 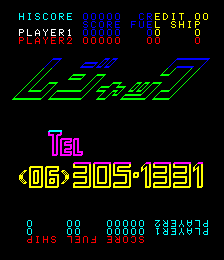 Space War has an extra screen in attract mode with Leijac's logo and telephone number. The screen is actually in all versions of the game, but Intruder and Space Laser dummy it out. Put the following cheat in MAME's intruder.xml / spclaser.xml cheat files to re-enable the Leijac screen:

The cocktail versions (like spcewarl) have support for 1 or 2 players, while the upright versions (spcwar and intruder) are 1-player only. The code to support Player 2 is in all versions, and MAME even has 2-player support for these sets, but the actual upright cabinet only had one joystick and one fire button.