A platformer featuring the famous real-life martial artist and actor of the same name. You gotta rescue Jackie's sister Josephine (a made-up sister, not a real family member) along with the entirety of China. 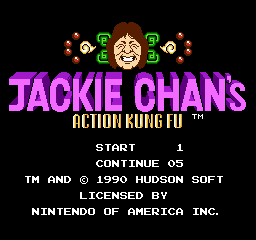 On the title screen, press Up, Up, Down, Down, Up, Down, B, A, Start. To get 99 continues, press B on Controller 2 after entering the code.

The level select code lets you start at any of the five areas by pressing Up or Down. This code is mentioned in the manual as a secret code for 99 continues but fails to mention the level select bit.

The Japanese title screen is completely different from the US version and features Jackie Chan's in-game sprite instead of something resembling his actual face.

The only difference between the Japanese and Europe/US credits is that the "H" in Masakatsu's alias Shinkon Kiyoshi is not present in the international releases.