James "Buster" Douglas Knockout Boxing is a port of the arcade game Final Blow, except reskinned to star Buster Douglas because he knocked out Mike Tyson and Genesis does what Nintendon't.

An older version of the Taito logo, along with the newer one, is loaded with the title screen graphics in the Japanese version. 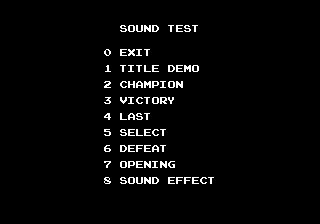 On the menu showing what mode to play on, select an option and press C + Start on Controller 2.

What started out as a normal boxing game in Japan was repackaged as a licensed boxing game as part of Sega of America's "let's put real sports stars on our sports games!" strategy.

The title screen was changed accordingly. Of note is that the Final Blow title graphic has an animation, while the James "Buster" Douglas graphic does not. 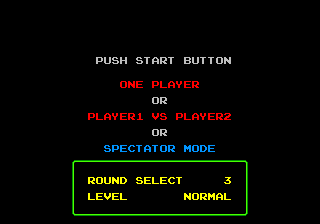 The international releases add a menu with some options once a mode is chosen, allowing the player to change the difficulty and the number of rounds.

A different character order, and an alternate character, are in the Japanese version; Dynamite Joe, Detroit Kid, King Jason, Fernando Gomez, and Kim Nang. The international versions replace Detroit Kid with "Buster" Douglas, makes him the first boxer, and switches the order around, with Dynamite Joe being the last on the list.

In addition, a few changes were made to the stats; the line showing the boxers' arm reach was removed; and the KO record time had its prime marks replaced with a colon.