James Bond 007: NightFire is a first-person shooter featuring characters from the James Bond universe, and a sequel to James Bond 007 in... Agent Under Fire.

Aside from the "Training" mission at the start, these cut missions give off the impression that the latter half of the game's story was trimmed extensively when compared with what they originally intended. Some of these missions sound very similar to missions they lie either before or after, so they may have originally been alternate versions of the final missions we got. That, or they were just deemed unnecessary to the overall plot. For example, in the final game Hidden Agenda's main objective is covered in the stage Chain Reaction; Atoll Infiltration's objective is covered by Deep Descent; and Island Infiltration has a distinct second half that takes place along a river that renders it the longest stage in the game, possibly a result of absorbing River Gauntlet. No map data remains for any of these cut missions.

Located right after Phoenix Fire's information in the text strings are a set of objectives that don't find use in any of the final missions. Considering their location, it's entirely possible that these objectives were originally used for the scrapped mission, Streets of Tokyo, or for something else entirely. The Mission Objective 5 text is either a placeholder, or a sign that whatever mission this may have been for only had four objectives.

Just like the above text, however these exist right before the objectives of Equinox, the game's final mission. Unused dialogue implies that there was a beginning section to Equinox that was scrapped, so these two objectives could have originally had something to do with that content.

There exists unused dialogue that heavily implies a different beginning to the game's final mission, Equinox.

A section that seems like it would belong in an earlier version of the FMV for Equinox, where Bond would have to sneak into Drake's defense platform while also possibly rescuing members of the original crew as hostages. This video by NotyourusualZero attempts to put this unused dialogue back into the final game's mission.

Dialogue that would probably be spoken by Alura right at the beginning of the mission.

Bond attempting to speak to the onboard crew.

The file "def_Startup.cfg" lists all of the maps used in the multiplayer mode, though along with them are a couple maps not actually used in the game labeled as "HT_Level_SpaceStation" and "HT_Level_Facility". Interestingly, they use the same loading screen as other multiplayer maps in the game, so it can be inferred that they weren't completely scrapped by the development team. Unfortunately, attempting to load either of them causes the game to crash on the loading screen. Judging by the filenames alone however, it can be assumed that the SpaceStation map was meant to be based off of the last mission in the game's story mode, "Equinox". The other map, Facility, is a different story. While it's possible that it could be based off of some part of the singleplayer mode like most of the other multiplayer maps, it also shares the name with a map from another game in the series, James Bond 007: GoldenEye, so perhaps it could have been a remake of sorts.

Among the game's vast arsenal, there are actually three unique weapons meant for the multiplayer mode that go unused. These include the Q-Pen, a single-fire weapon that shoots darts dealing surprisingly low damage for a weapon based around explosives; the Torpedo Launcher is another explosive weapon that fires heat-seeking torpedoes (despite the weapon's firing mode being labeled as Guided) is actually used by the single player mode's final boss but is never usable by the player in normal gameplay; and the Flare Gun, a strange weapon that uses the P2K's model and fires harmless purple lights.

Along with those, a few others were also planned to be in the game, but all that remains of them is their names mentioned in text strings. These include:

The "Munitions Belguique PDW90" appears in the PC version. 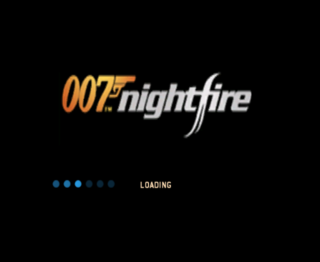 This dummy loading screen is shown whenever any invalid map ID is loaded. It's likely this is used as some sort of fallback procedure for whenever the game can't load a map, though unfortunately seeing this loading screen also means your game is about to crash/hardlock.

One way this screen can be achieved is through the use of the Action Replay code 04207C18 070000xx, which forces the game to load a different map than intended upon entering the singleplayer mission, "The Exchange". Replace xx with the two digits used by whatever map you're trying to use (refer to "def_Startup.cfg" for these IDs).

While a vast majority of the game's debugging materials were removed before release, a single leftover menu remains that lets the player view full motion videos from the game. Interestingly, videos from the driving sections of this game are absent from the selection, meaning only clips from the first-person perspective are available. 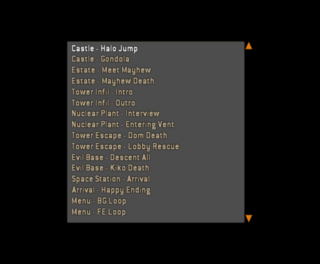 Aside from clips from the game's singleplayer missions, other options included are:

Sadly, the menu falls just short of being fully functional, as for whatever reason the Space Station - Arrival option in the menu doesn't actually load anything. The Action Replay code below will redirect the Codenames option in the main menu to the FMV Viewer.

A placeholder graphic, most likely used in place of the singleplayer mission icons. 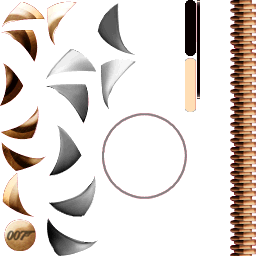 An earlier version of the health meter, along with both ammo and armor HUD elements.

A chunk of graphics showing early versions of the Vanquish's gadget HUD elements. There is also a set of button graphics, many of which appear to be unused.

Another set of different button graphics. The GameCube buttons are the same as the ones used in the final game, and buttons for the PlayStation 2 and Xbox are also included. Other than that, the S, G, D, I, H, and V graphics in particular don't fit any controller supported by the final build.

Yet another set of button graphics, though a couple segments from the early health meter are also scattered about. 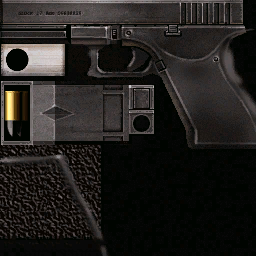 Looking at the raw texture file shows the "Kowloon Type 40" pistol has a barely visible "Glock 17" written on it. The font and style do not match the markings on a real pistol, so it's not a leftover of being made from images of a real firearm. Technically used, but it's so small, at a sharp angle, and low quality so there's no way to read it in-game.

There is a bit of unused Sample Hint Text.

Listed right after the other difficulties in the game, possibly suggesting a cut fourth difficulty.

Listed alongside other options in the game. It's unclear what this option could have originally been for.

These three strings refer to menu options that no longer exist, possibly remnants of an early demo version of the game.

These strings seems to suggest that early in the development of NightFire, there was an option to switch between 60hz and 50hz display. Possibly used as testing for the PAL release of the game.

The Secret Unlocks section used to be referred to as a Cheats section. Button displays for this dialogue box can also be found.

Labels for something in the game being either new, in-progress, or incomplete. No strings directly before or after these labels indicate what they may have been used for.

Strings referencing a scrapped sub-menu from the multiplayer mode.

Mysterious strings that seem to go along with the scrapped Q-Mods sub-menu.

Title and description for the above scrapped multiplayer mode. As of right now, no behavior for this scenario has been found.

Scrapped reward text that references a zero gravity mode for multiplayer, along with something called Computer Controlled Weapons.

Apparently Kiko's suit appearance was at one point planned to be an unlockable character, similar to both Bond and Drake's "suit" variants. However, this string is the only remaining reference to this cut character.

Cut multiplayer bot options. No other text exists to go along with these.

Early description for the Capture the Flag multiplayer scenario.

Early description for the King of the Hill multiplayer scenario.

Early description for the Team King of the Hill multiplayer scenario.

An early description for the scrapped Golden Gun multiplayer scenario, suggesting that it actually stuck around for a while before being cut.

The final version of the game only allowed up to 6 bots at a time (the Xbox and PlayStation 2 versions only allowed for 4!) 16 bot support would most likely have been scrapped for console limitations if it actually existed, but this also could have just been placeholder text.

Located in the folder common, this file contains various debugging options (some of which appear to be PC only) along with a directory of maps used throughout the game's singleplayer and multiplayer. Changing this file does nothing to the actual game, but there are a few things of note that still make it particularly interesting regardless. For one, it actually lists several maps in the game that you can't normally access such as "HT_Level_AllCharacters" and "HT_Level_TestRoom2". It also lists maps within the section for Multiplayer maps that go unused, labeled "HT_Level_SpaceStation" and "HT_Level_Facility".

Looking at the LoadMap IDs also gives us a decent idea of what order the maps were developed in. This makes maps like "HT_Level_Ravine" and "HT_Level_Tower2Elevator" interesting, as their IDs imply they were made much later in development in comparison to other maps in their sections.

Within common there is also a file called TuningVars.txt with several configuration options and comments for the entire game.

The file is 728 lines long. It seems to refer to computer-controlled characters as "Drones". It is unclear whether or not any of the variables can affect the final game. Knowingest edited Plr_AimSpeed_X to 99.127 (much higher than the existing 0.1275) with GC-Tool and did not notice any change in aim speed.

The file Nightfire.elf includes the section for cheats. This cheats section can be found between 0x1AD930 and 0x1ADB0D. Alongside every normal cheat (published around the time of the game's release), there are two cheats that were not previously published.

Both cheats are functionally identical to the previously-published cheats.

Also included in the file is unused code referencing the ability to change sensitivity in options between 0x1C0AC0 and 0x1C0B07.

On the root of the game disc is a file called run.bat.